The sight of a no. 7 train pulling into the Junction Boulevard stop in Queens during the weekday morning rush offers something of a ridership rarity in the subway system: a glimpse of 2019.

Commuters line the length of the elevated platform during the early morning hours, crowding onto local and express trains at a station in heavily immigrant and working-class Corona, where weekly ridership is at nearly 70% of pre-pandemic levels, according to THE CITY’S “How’s New York City Doing?” Recovery Tracker.

“You can feel things picking back up again,” said Claudio Rivas, who commutes by subway to his job at a Manhattan restaurant. “The people here need to go to work, they need to go to school and the subway is their way to go.”

THE CITY’s analysis of turnstile records showed a sparse recovery in ridership at Midtown and Lower Manhattan stations, handsomely outpaced by the recovery at stops in other boroughs.

Some in Brooklyn and Queens are running at two-thirds of their 2019 levels, but only a handful of Midtown and Lower Manhattan stops have regained more than half of their pre-pandemic riderships, with some major stations, including Grand Central-42nd Street and 14th Street-Union Square, still at a third of their pre-pandemic traffic.

Turnstile data analyzed by THE CITY from all 472 stations shows that ridership at three Queens stops along the No. 7 line is currently at more than 65% of 2019 levels, among the highest in the entire system.

The Junction Boulevard station, where ridership tanked by more than 90% in spring 2020, has regained around 65% of riders compared with its 2019-level, turnstile data shows, while the 69th Street-Fisk Avenue stop in Woodside was at around 68% of pre-pandemic levels, with more than 20,000 weekly entries.

Mets-Willets Point was at 65% with nearly 25,000 weekly entries after the Mets played four home games during the seven-day stretch.

“This is just bearing out knew what all of us kind of instinctively,” MTA Chairperson and CEO Janno Lieber told THE CITY. “You know who really needs the subway system? People who are not affluent.”

“You can’t work from home when you work in construction,” said Angel Jadan, a 47-year-old construction worker, while waiting for a train at Junction Boulevard’s Manhattan-bound platform just after 7:30 am on Friday alongside workers that included home health aides and restaurant employees.

Lieber sounded a similar note when he told the agency’s board in May that many straphangers “aren’t going to sit in swivel chairs in Manhattan skyscrapers” and noted that the stations with the highest rider-retention rates are concentrated in working-class communities in the east Bronx, southern Brooklyn, and in Queens neighborhoods along sections of the No. 7, J/Z and A/C lines.

“It’s Jackson Heights, it’s Corona, it’s Elmhurst,” Lieber said, adding that the system is not entirely dependent on workers traveling to and from offices in Manhattan.

The ridership figures reflect another shift in pandemic-era use of the subway.

THE CITY last year reported that two Queens stations — the Jackson Heights-Roosevelt Avenue/74th Street complex on the E, F, M and R and No. 7 lines, along with the 7’s Flushing-Main Street terminal — ranked among the MTA’s Top 10 list of busiest stations, which have traditionally been Manhattan stops.

“Destinations and centers of employment activity are changing,” said Kathryn Wylde, head of the Partnership for New York City, which represents hundreds of businesses that employ more than a million New Yorkers.

While the rate of ridership return at some stations along the Sea Beach Line portion of the N in Southern Brooklyn has topped 70% — including 83% at Fort Hamilton Parkway, 79% at 18th Avenue and 71% at 86th Street — that’s driven, in part, by those stations being partially closed for renovations until the summer of 2019.

Similarly, the Astoria Boulevard stop on the N and W lines, which was closed from more than nine months in 2019, has seen ridership jump to 205% of pre-pandemic levels.

Even as MTA ridership data shows the number of daily subway trips has topped 3.3 million on nine days in June, or about 60% of similar pre-pandemic days, the agency is still dealing with steep dropoffs in entries at stations clustered around business districts in Midtown Manhattan, Downtown Brooklyn and Long Island City, Queens.

Among the city’s 10 busiest stations in 2019, all of which were in Midtown, Union Square or Lower Manhattan, none have gone higher than the 40% rider-retention mark, MTA data shows.

The Times Square-42nd Street/Port Authority Bus Terminal hub, traditionally the busiest station in the system, still has nearly 470,000 weekly entries, data shows, but that’s only 38% of its pre-pandemic share.

A Partnership for New York City survey last month of more than 160 major employers showed that 38% of Manhattan office workers go to their workplace on an average weekday, but only 8% are in the office five days a week.

“They’re not going to in-person meetings like they used to,” he said.

For the week ending June 15, overall office occupancy jumped to its highest level in the pandemic, 42.2%, according to THE CITY’s recovery tracker.

“Right now is the wrong moment to reach any long-term conclusion,” Wylde said. “Employers are trying to be responsive to the fact that a lot of their people are concerned about public safety, that they have anxiety from the experience of the last couple of years, that this is a time of great stress for their people.

“Employers are being patient — but that has consequences for MTA revenues,” she added.

The MTA, which has since mid-2020 secured more than $14 billion in federal aid to balance its budget through 2025, has said it will face a fiscal cliff if ridership does not rebound by the time the federal money runs out.

At the Wall Street stop on the No. 4/5 line in Lower Manhattan, barely more than a quarter of its pre-pandemic riders have returned, with fewer than 29,000 weekly entries into the station, data analyzed by THE CITY shows. 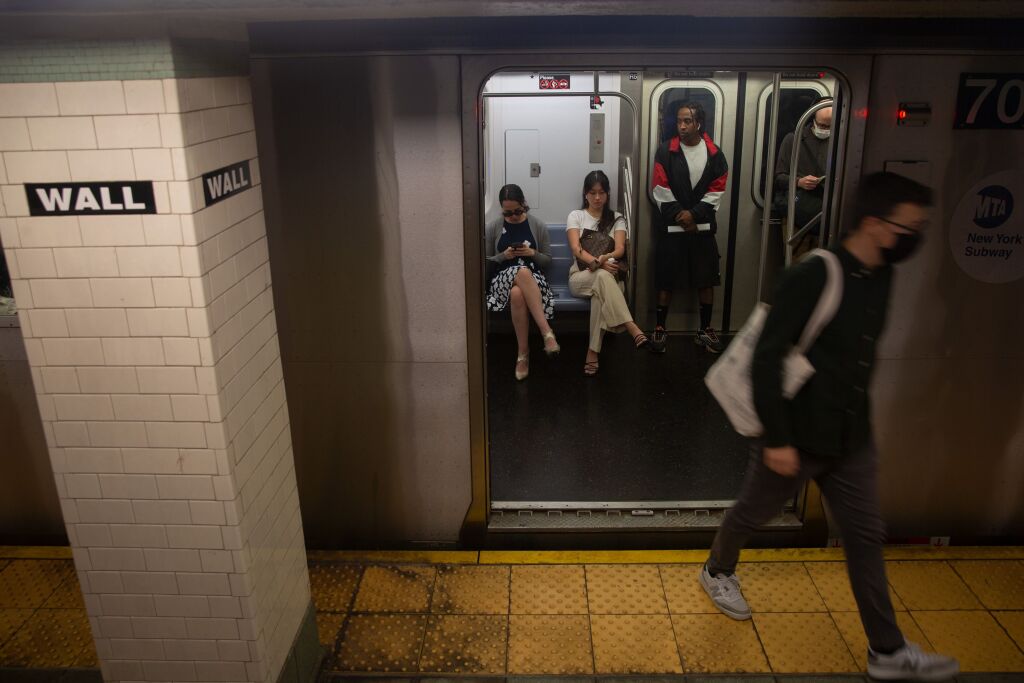 “A lot of downtown workers still work from home, some people are still jobless, some bought cars during the pandemic,” Vin Lopez, a stockbroker, said on the platform at the Wall Street stop. “And some still fear COVID.”

There are other factors at play, too, at stations with student populations. The 8th Street-New York University stop along the R and W lines as well as the 116th Street-Columbia University stop on the No. 1 line are at around 30% of their 2019 levels.

“These are my countrymen: When they go to work, they buy from me,” said Sanchez, 33, to an Ecuadorian man who sells natural juices from a cooler he keeps in a small cart. “And I’m out here for them from 4 in the morning.”