New Yorkers generally know to call 911 and 311 for emergency and non-emergency services.

But starting July 16, dialing 988 will connect them with mental health, suicide prevention and substance use disorder counselors — as part of a nationwide initiative to better address those needs without the involvement of police.

As part of a federal law signed by President Donald Trump in 2020, people around the country will be able to reach the National Suicide Prevention Lifeline and its local outposts simply by dialing 988, rather than a full 10-digit number.

In New York City, calls to 988 from local area codes will route to NYC Well, a 24/7 hotline, chat and text service — first launched in 2016 — where mental health professionals provide support and offer referrals for treatments and resources. If needed, the hotline staff can dispatch a Mobile Crisis Team, which includes mental health professionals, to an urgent but “non-emergency” situation. But those units only go out between 8 am to 8 pm

The 988 number is part of a wider push to increase access to mental health and substance use disorder resources amid a growing crisis, and marks an effort to move away from always relying on law enforcement to handle such situations.

“This is an opportunity to build our community-based mental health system that really responds to people and does not use emergency rooms or the police,” said Ray Schwartz, co-president of the National Alliance on Mental Illness of New York City’s board of directors “This is not a criminal justice issue, this is a health issue. 988 underlines that framework.”

New York officials have been steadily preparing for the roll-out of the 988 number, developing a plan and budget for the system. But that appears to be a rarity, according to a June study by the RAND Corporation, which surveyed 180 local officials across 23 states and determined more than half weren’t involved in creating a strategic plan, and only 16% indicated they had a budget.

New York City in particular may be well-suited for success because of NYC Well, according to both mental health advocates and the city Department of Health and Mental Hygiene. But there are still some unknown factors ahead.

How It’s Supposed to Work

Anyone can call 988 — or the full National Suicide Prevention Lifeline number, 1-800-273-8255 — if they or a loved one needs support: It can be a parent worried about an angry teen who won’t come out of their bedroom , or a person with a mental health condition who feels emotionally distressed, experts say.

A crisis counselor from NYC Well, operated by Vibrant Emotional Health, will answer the call, listen to concerns and provide guidance about how to handle the situation, share resources or possibly dispatch members of the Mobile Crisis Unit — when available. Vibrant did not respond to a request for comment.

On scene, a counselor may speak to a person from the other side of the bedroom door, for example, or help them go to a clinic safely and without the possibility of being handcuffed.

NYC Well phones are available to pedestrians on the George Washington Bridge.

Team members may also stay in touch with a caller or concerned friend or family member for a period of time after the crisis to make sure they’re getting the support they need.

Public Advocate Jumaane Williams proposed a version of the 988 system in 2019. Williams, who is now running for governor, did not respond to requests for comment.

One potential hitch in the 988 roll-out could be telephonic: People who live in New York City and use cellphones that don’t have a local area code will not be routed to NYC Well, but to the local hotline as the area code indicates .

That means if your phone doesn’t have a New York City-based area code, you’d have to dial the full 888-NYC-Well number to get local help.

The FCC is working with states and local governments to examine how to use geolocation technology to ensure that when a person calls 988, they are referred to a local crisis hotline in proximity to where they physically are, not where their area code indicates.

“It’s going to take quite a while to come up to speed, to get all the states involved, to get the technology in order,” said Alan Ross, executive director of the Samaritans of New York, which runs a separate 24-hour, All Volunteer Suicide Prevention Hotline.

He noted that the July 16 launch will really only begin a “transition” towards full 988 implementation, and that investing in a variety of helpline models, not just one, would be important.

A Barrage of Calls

The state and city project significantly more calls placed to the hotline as a result of the 988 rollout.

When NYC Well is unable to pick up the phone, the caller is routed to a national backup crisis center — still a National Suicide Prevention Lifeline — according to OMH. Calls to the Lifeline from Manhattan, Brooklyn, Queens and the Bronx have a higher likelihood of being routed out of state than in most counties in New York, according to a February report from the state Office of Mental Health.

The city Health Department has been “expanding” NYC Well’s response capacity since it launched, agency spokesperson Victoria Merlino said in an email.

“The city will be ready to answer calls from NYC area codes to 988 on July 16th, and will have the staff capacity ready to provide crisis counseling, peer support, information, and referral to ongoing behavioral health services that NYC Well already offers,” she added. 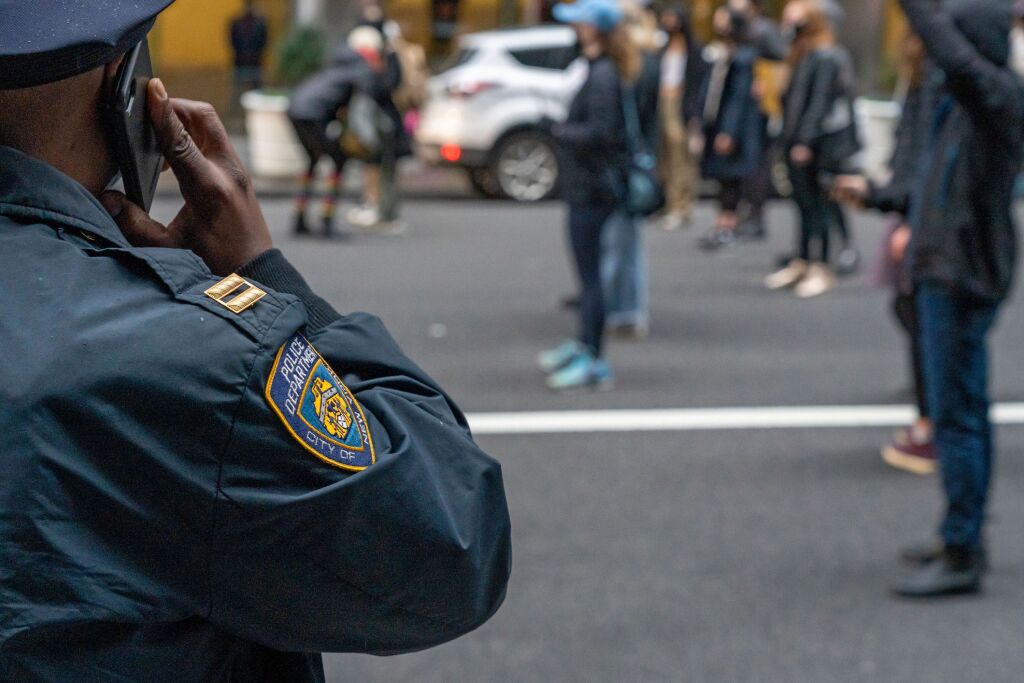 The mental health crisis hotlines are supposed to provide an alternative to calling the police.

The estimated cost to run NYC Well this year was $11.2 million, and it was budgeted at $20.8 million per year for the following three years, according to the Citizens Budget Commission.

On a state level, the budget includes $35 million for the first year of the 988 hotline, with a planned increase to $60 million in the following year. The feds also kicked in a $7.2 million grant for two years, as well as $10 million to start up the program.

“988 is critical and exciting, but we need to also fund the community services that go along with it,” said Nadia Chait, associate director of policy and advocacy at the Coalition for Behavioral Health. “We have a staffing crisis across behavioral health programs.”

She pointed out that often there’s a gap of weeks or months before people who call mental health hotlines can benefit from treatment programs, but also expressed optimism about additional services coming online as it becomes more apparent what people need based on the calls.

New York state officials are also in the process of creating 12 “crisis stabilization centers,” where people can go to get connected to care, according to the Office of Mental Health. The plan is for three centers in New York City.

Pieces Need to Fit Together

In the event of an emergency, or when someone is at immediate risk of harming themselves or others, DOHMH recommends calling 911 instead of 988 — and calls to one line can be transferred to the other.

As part of a pilot program in Northern Manhattan and parts of the South Bronx through what’s known as the Behavioral Health Emergency Assistance Response Division (B-HEARD), EMTs and social workers can respond to mental health calls to 911. The City Council’s budget included $55.3 million to expand B-HEARD beyond those neighborhoods.

Chait said that she and the mental health and substance use service providers who are part of the Coalition for Behavioral Health are “puzzled” about how B-HEARD will interact with the 988 efforts.

“Our concern is we are telling people — and we should be telling people — to call 988 and to avoid a police response that unfortunately can turn tragic for the kinds of crises that we’re talking about,” Chait said. “At the same time, we’re investing in a crisis response through 911, and so it just doesn’t quite make sense to have these be separate.”

In spite of the pilot program, cops were still handling most 911 calls, THE CITY reported last year.

At least 18 people experiencing mental health crises have died at the hands of police since 2015, according to a 2021 report by New York Lawyers for the Public Interest.

With police involvement, “you’re constructing an opportunity to create a greater crisis,” said Schwartz, of the National Alliance on Mental Illness of New York City.

“Saying the police need to show up is saying everyone in a mental health crisis is violent, and that’s a presumption.”