Aaron Maslow has given a lot to the Brooklyn Democratic Party machine.

He’s spent hours binding petition volumes to get candidates supported by the establishment onto the ballot. He’s sat through interminable Zoom meetings to fight progressives demanding rules changes. He’s poured more than $30,000 of his own money into paying for mailers and donating to campaign accounts to help establishment-allied leaders, especially his wife.

Last month, Maslow resigned from his post as a secretary for the Brooklyn Democratic Party and announced his candidacy for a seat on Brooklyn’s Supreme Court, which handles serious felonies and high-dollar civil claims. Judges there sit for 14-year terms and currently make $210,000 annually.

Maslow did not respond to requests for comment for this story. He is one of 18 people who have explored a run for Supreme Court this year, who collectively donated at least $108,000 in campaign contributions over the years to party executives and political clubs that play a key role in elevating candidates to the bench.

But that rule does not apply to many of the donations from this year’s crop of candidates, along with thousands more they’ve given to state legislators and other influential insiders who don’t have a formal role in the party apparatus. That’s because judicial candidates can make campaign contributions before they formally declare their intentions to seek Supreme Court seats.

Every August, the Brooklyn Democratic Party holds a convention in which hundreds of judicial delegates, elected in the June primary, nominate candidates for open seats in the Supreme Court. This year 12 seats are up for grabs in Brooklyn, including three that are currently vacant.

A nomination gets a prospective judge on the Democratic line for the November general election, which is usually an insurmountable advantage in blue Brooklyn.

But party insiders note that the decisions at the convention are largely determined ahead of time. A few days before the August gathering, a few dozen party executives attend a private meeting where they hash out who the nominees will be — deliberations which are usually then rubber-stamped by the convention’s delegates.

Critics say that dynamic compels many would-be judges and incumbents seeking re-election to donate to and otherwise curry favor with leaders of the machine. And while their contributions may be small compared to contests for seats in Albany and D.C., the steady stream of donations from judicial candidates can go a long way in the obscure, low-turnout primaries for party leadership positions.

“In order to receive the party nomination, you have to attend a whole series of fundraisers and make large contributions to party members,” said Noah Rosenblum, a law professor at NYU who studies the judiciary. “I don’t know that New Yorkers would think that qualifications for being a judge include the ability to hobnob at cocktail parties and pay the gala admission.”

Who Wants to ‘Make a Judge’?

Judicial nominations are one of the most vital patronage powers left for the Brooklyn Democratic Party establishment, which is facing a growing movement of progressive dissidents and calls for a criminal investigation following a series of scandals this spring.

Under the leadership of party chair Rodneyse Bichotte Hermelyn, who is also a state Assembly member, establishment-backed leaders have been linked to signature forgeries aimed at kicking low-level opposition candidates off of the ballot in Brownsville, and the inclusion without their knowledge of at least 20 residents on candidate petitions for party seats in South Brooklyn.

Collecting payments from judicial hopefuls is a decades-old tradition among Brooklyn Democrats, which has at times crossed criminal lines.

But Cory Provost, a Democratic Party executive representing East Flatbush, said concerns about a pay-to-play process in the selection of judges are overblown.

“I get the optics of it, they’re donating to someone who’s going to nominate them blah blah blah,” he said. “But I’ve nominated judges who haven’t donated to me, that’s not a factor.”

A Brooklyn party insider who spoke on the condition of anonymity, however, argued that while contributions alone do not guarantee a nomination they do help distinguish candidates seeking the coveted nod in a crowded field.

Attending fundraisers for party leaders, they said, is “sometimes a way to be seen by the leaders you want to be seen by.”

“They can have a phone call, they can go to your club night, but if they want to get more time with you, that’s part of it,” the insider said.

Bichotte Hermelyn and her ally Erik Dilan, an Assembly member and party executive, have each raised more than $4,000 over time for their Assembly campaign funds from the people vying for a judgeship this year.

Likewise, Maritza Davila, a Bushwick Assembly member, and Chris McCreight, a party leader from southern Brooklyn — who have both been at odds with party leadership — have each accepted around $2,000 for their campaign funds from the 2022 candidates.

A handful of party leaders, however, have tried to avoid taking money from judicial candidates, arguing that the never-ending rounds of dinners and galas taint the selection process.

“One of the reasons I’ve been able to be independent is because I don’t want anything,” said Joanne Seminara, a party executive from Bay Ridge who has clashed with party bosses. “I don’t want to make a judge. I just want to do the right thing.”

Campaign finance records show Seminara, an attorney by trade, has never taken money from any of the candidates vying for support at this August’s party convention.

“Even if it costs me money, I’m not taking a check,” she said in an interview last month. “I’m not taking your mother’s check either.”

New York’s unique process of using conventions for judicial primaries has been challenged before.

In 2004, Margarita Lopez Torres, a Brooklyn civil court judge, sued the state Board of Elections arguing that New York’s judicial convention process was unconstitutional because it effectively excluded candidates who were not the handpicked choices of party leaders, stripping voters of their right to select their parties’ judicial nominees.

Lopez Torres had once been in good standing with the party machine, but became a pariah after she had allegedly rebuffed two separate patronage demands from party executives.

In 1995, for example, Vito Lopez, a powerful party executive who would go on to be party boss, reputedly demanded the civil court jurist fire her court attorney and hire his daughter, who had just graduated law school. Lopez Torres refused. 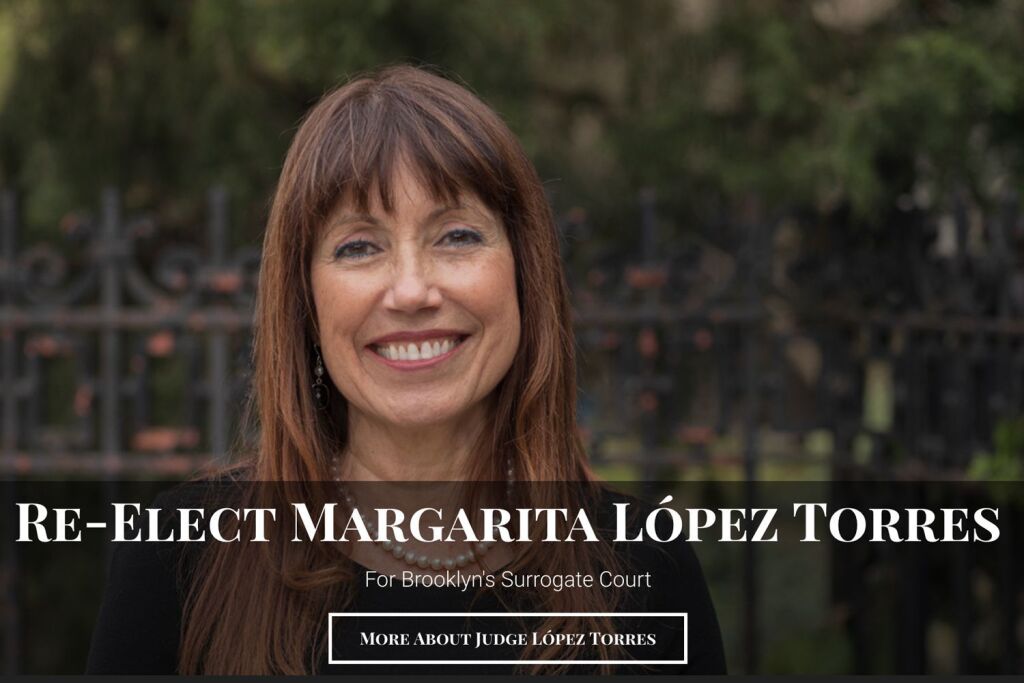 Two years later, the civil court judge tried to campaign for a Supreme Court spot at the summer’s Democratic convention from the floor. But party executives had all of the convention delegates in the bag. Not a single one was willing to cross then-party boss Clarence Norman and put forward her nomination.

In 2006, John Gleeson, a federal judge, sided with Lopez Torres, declaring that “the path to the office of Supreme Court Justice runs through the county leader of the major party that dominates in that part of New York State.”

But the Board of Elections fought Gleeson’s blistering decision, and two years later the U.S. Supreme Court upheld the constitutionality, if not the merits, of the state convention process in a unanimous decision, ruling that it was up to lawmakers, not judges, to reform the system.

‘I Don’t Answer Questions. I Wish You Luck.’

The system as it’s built now limits what declared candidates can contribute, but those limits don’t apply to family members (though the rules do tell candidates to “encourage” family members to abide by them).

Take the case of Andrew Borrok.

Borrok was a wealthy real estate mogul and Hamptons socialite when he ran for a civil court judgeship in 2014.

He had the backing of then-Brooklyn County Boss Frank Seddio and a $250,000 campaign war chest that he loaned to himself but barely used because he ran unopposed, according to a report at the time.

Less than two weeks after Borrok won the Democratic primary in 2014, his father and sometimes business partner Charles Borrok — an executive at the mega real estate broker Cushman & Wakefield — made his first of what would become dozens of donations to influential members of the Brooklyn Democratic Party.

It started in September 2014 with $2,400 to a campaign account belonging to Seddio.

It took only three years on the bench — a meteoric pace by judicial standards — for Borrok to be nominated for a Brooklyn Supreme Court seat by the Democratic Party.

By the time Andrew Borrok’s name appeared on the general election ballot in Brooklyn on Nov. 7, 2017, his father’s donations to party officials topped $75,000 — including $12,000 directly to the Brooklyn Democratic Party.

“Pretty much every civil court judge that wants to be a supreme court judge — they donate to district leader campaigns, they buy them meals when they meet with them, they go to the county dinner, they go to political fundraising things,” said a former Brooklyn Democratic insider. 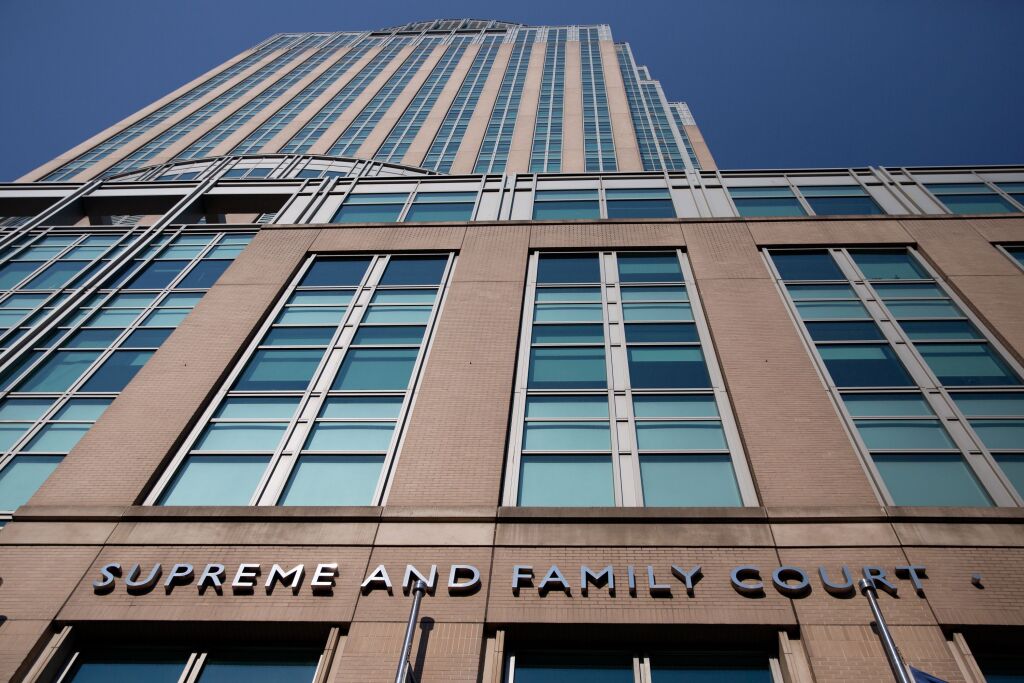 “What makes Borrok weird and a couple other ones exceptional is the amount of money that went into it,” added the former insider. “These are by district leader standards very substantial contributions.” District leaders are unpaid but wield influence in deciding party rules and leadership.

Andrew Borrok and another Democratic nominee won the two open Supreme Court slots in Brooklyn that year — trouncing a Republican candidate who garnered just 10% of the votes in a county dominated by registered Democrats.

Over the next year, the contributions from Charles Borrok continued — including another $10,000 to the Brooklyn Democratic party — pushing the judge’s father’s total payments to the campaigns of party officials past $111,000.

Since then, Charles Borrok has contributed an additional $12,000 to the Brooklyn Democratic Party, state Board of Elections records show.

Asked what motivated the contributions to the Brooklyn Dems, Charles Borrok said by phone, “It was a long time ago. I can’t answer your question.”

When it was pointed out that some of the donations were made in recent years, he said, “I don’t answer questions. I wish you luck. Goodbye.”

Rosenblum, the NYU law professor, said the effective requirement that candidates cough up campaign cash and socialize with party apparatchiks dissuades many qualified candidates, including public defenders, civil rights attorneys and other service-minded professionals, from entering the fray.

“We make it too difficult for attorneys who are motivated by a principled commitment to justice and public service to go into the judiciary,” he said, arguing that the process filters the candidate pool to “party insiders” and “people who come out of corporate law and have a lot of money.”

Even as the Brooklyn Democratic Party’s longstanding patronage practices come under scrutiny, party sources predict business as usual at the convention next month.

In June, the county establishment lost several seats on the party’s executive committee, whose new members will come aboard in September. But until then, the dissidents concede, party boss Bichotte Hermelyn commands a clear majority in the party leadership — including among the judicial delegates headed to the convention in August.

Maslow, who hasn’t previously served as a civil or criminal court judge, and whose wife Lori resigned from her party executive seat last year after an uproar over her tweets attacking Chinese and Palestinian people, is among the candidates who has the backing of establishment leaders, sources say.

While his support for the party and its expected support for him may create at the least the appearance of impropriety, state lawmakers — many themselves indebted to the party machine — have done nothing to ban perceived quid pro quos in the years since the U.S. Supreme Court shot down Margarita Lopez Torres’ challenge of New York’s convention process.

Lopez Torres lost that challenge. But in a brief opinion supporting Justice Antonin Scalia’s majority decision in 2008, Justice John Paul Stevens went out of his way to emphasize that the court was deciding on constitutionality, not “wise policy.” He quoted a refrain of former Justice Thurgood Marshall: ”The Constitution does not prohibit legislatures from enacting stupid laws.’”