There’s near-unanimous consensus that Penn Station is a messy, uninspiring labyrinth, and needs a revamp.

Revitalizing the transit hub, however, has eluded New York governors for decades. gov. Kathy Hochul is hoping she can change that.

Her administration has a plan to raise money from the development of new private towers around Penn Station to help fund the station’s redevelopment in the future.

But the project, which Hochul mostly inherited from her predecessor Andrew Cuomo, is facing major questions and criticism. Nearby residents and business owners, as well as area elected officials, have called for the skyline-altering concept to be halted, or scrapped.

State lawmakers and watchdog groups are meanwhile questioning whether the real estate will bring in enough money to cover the costs of overhauling the transit hub. The watchdog group Reinvent Albany estimates the state may end up between $3.4 billion and $5.9 billion short.

A state authority is set to vote on a final project plan later this month, even as many questions remain unanswered. If you’re just tuning in, here’s what you need to know about the big Penn Station neighborhood redo:

What does the state want to change? What’s the plan for Penn?

State officials hope the redevelopment will generate revenue from payments made by developers and owners of new property, which can then be used to make improvements to the existing Penn Station, the subway stations below ground around Penn and the streets, sidewalks and transit entrances in the area.

A long-term goal is, perhaps, to fund a future expansion of Penn Station to the blocks directly to its south.

What idea is this anyway?

You can thank former Gov. Andrew Cuomo for getting the ball rolling.

Cuomo first unveiled a concept to overhaul Penn Station in 2016, one part of which was realized — the transformation of a postal facility into Moynihan Train Hall. Then, in 2018, he laid the stage for the state to oversee the project with language declaring the Penn area a “public safety hazard” in that year’s approved budget. (More on why that’s important later.)

He introduced an updated project concept in his 2020 State of the State address — delivered just weeks before COVID-19 arrived in New York, and state officials began an initial review in July 2020. He pushed the plan even as scandals threatened his power.

The former Hotel Pennsylvania, on one of the sites slated for demolition under the Penn Station redevelopment plan.

After Cuomo resigned, Hochul put her stamp on the project in November 2021, making promises that it would be scaled down by 1.3 million square feet, include affordable housing and create plazas open to the public.

Who are the major players?

The Empire State Development Corporation, a state authority, is leading the redevelopment negotiations and shepherding the project through multiple phases of planning and approval. ESD directors could vote on the project plan as soon as their next meeting, which an agency spokesperson told the New York Times will be held July 21.

One property holder, Vornado Realty Trust, stands to benefit most from the proposed scheme. The real estate company, which owns or manages nearly 20 million square feet of office space in Manhattan, owns more than half of the proposed development sites. Vornado chairman Steven Roth has been a booster of the project for years, and a big supporter of Cuomo.

Roth once described the former governor as “the master builder of our generation” and Roth and his wife gave at least $384,000 to Cuomo’s political campaigns since 2005, THE CITY previously reported.

Roth has also given tens of thousands of dollars to Hochul. The real estate mogul is a longtime friend and business partner of former President Donald Trump, and among his major donors, the Albany Times Union has reported.

While ESD is dealing with the financing aspects, MTA is the agency tasked with rehabilitating Penn Station. The agency issued a solicitation last month for architectural and engineering designs for the Penn Station overhaul.

The proposed redevelopment would significantly change the blocks around Penn Station and Madison Square Garden.

The state’s 115-page environmental impact statement describes changes that include:

A lot will change. But one notable fixture of the area will not: the block where MSG sits is not included in the current proposal, and the project does not address its future.

Who’s going to pay for it?

Hochul is proposing collecting payments in lieu of taxes, or PILOTs, through which property owners pay an agreed-upon fee to the state.

Albany lawmakers grilled ESD officials at a June hearing about the financials of the project — and sought the power to vote it down.

The New York City Independent Budget Office raised concerns about the fiscal health of the project in a May analysis. The IBO found that the city collected over $60 million in taxes in fiscal year 2022 from the 55 lots that make up the eight future development sites.

ESD has said it will reimburse the city for that lost tax revenue, but not how.

The Reinvent Albany report, produced with the Schwartz Center for Economic Policy Analysis at The New School, assumes that the Penn-area property owners will get a 20% discount off what they would have spent on New York City taxes — and projects that Vornado will save $1.2 billion.

How is this going to get done, and how long will it take?

The state projects improvements to Penn Station will be finished in 2032, while new developments around it won’t be fully completed until 2044.

ESD says it may wield two landscape-changing tools to get the job done: eminent domain and a law allowing the state to reshape the city if it’s “blighted,” or run down. 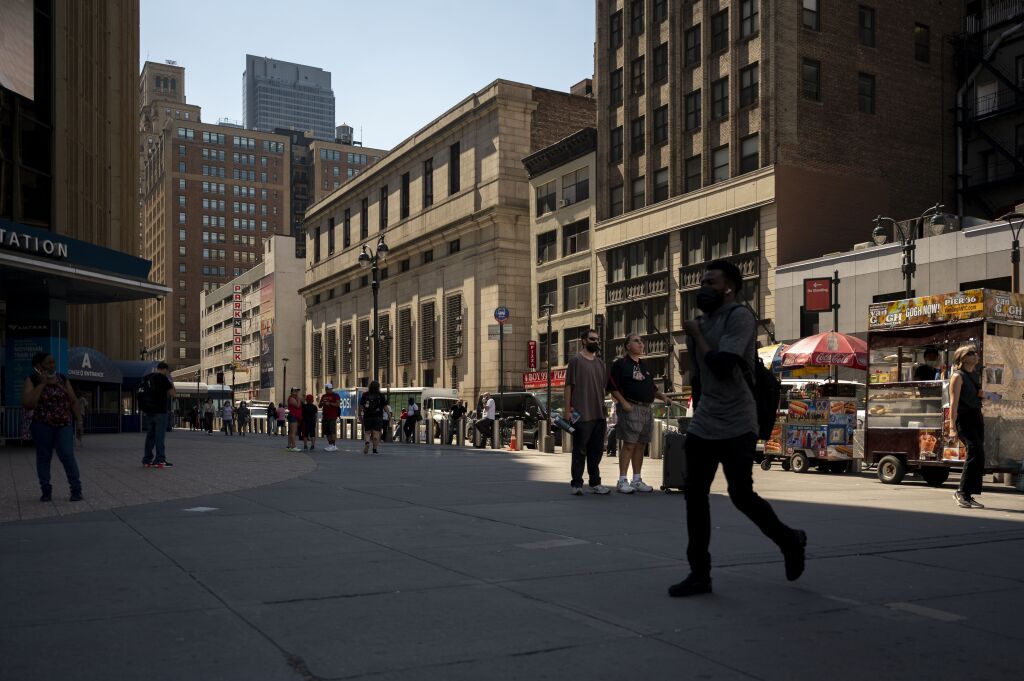 That law, the Urban Development Corporation Act of 1968, allows the state to go around the city’s regular land use approval process, which gathers local input and brings projects up for a vote in the Council and mayor. Under the UDC, the state can allow developers to build structures larger than what the city’s zoning allows.

The state also may use eminent domain to seize properties in order to make room for a potential expansion of Penn Station to the block between 30th and 31st streets, and Seventh and Eighth avenues.

Amtrak recently awarded a $73 million design contract for the project, as it sets its sight on the $12 billion expansion, according to The New York Times. The expansion, part of a project known as Gateway, is tied to the creation of two new one-track tunnels under the Hudson River.

What are the next steps?

ESD did not respond to THE CITY’s request for information about the timing of a vote.

Following ESD approval, the Public Authorities Control Board — which approves financial transactions for state authorities — will take a vote.

As THE CITY recently reported, some state lawmakers are seeking power to potentially vote down the Penn project, after Cuomo and the legislature curbed the board’s powers following the collapse of a deal to bring an Amazon campus to Long Island City.