Under a proposal heading toward state approval next month, the Penn Station Area Civic and Land Use Improvement project plan would be funded by taxing future real estate development at eight sites that surround the subterranean station.

“Going through existing Penn is a crummy soul-crushing experience right now,” Metropolitan Transportation Authority Chair and CEO Janno Lieber said at a Senate hearing room near City Hall. “We would change it to being something much more like Moynihan Train Hall with wide-open spaces, with light coming in, with intuitive navigation, with lots of entrances that make it easy to spread out whichever direction you’re going, just like Grand central.”

But the project has received significant pushback from the surrounding community and good government groups. Critics are concerned about threats to local businesses, the scale of development and the diversion of property tax dollars by the state.

It will eventually have to come for a vote before a state economic development board where power is split between the governor and appointees of the state Senate and Assembly — with Sen. Leroy Comrie (D-Queens), who convened Friday’s hearing, holding one of the seats.

A state lawmaker’s threat to use the Public Authorities Control Board to kill Amazon’s plans for a Long Island City headquarters preceded the tech giant’s cancellation of its New York HQ2— and prompted Cuomo to secure a change in state law to make it much harder for the board to veto big projects.

A Comrie-sponsored bill that recently passed both houses of the legislature would undo Cuomo’s change, but Hochul hasn’t yet said whether she will sign it.

“We don’t even have a vote on the PACB unless governor Hochul hurries up and signs the law,” lamented Manhattan State Sen. Liz Krueger at the hearing, “which we will push her to do, which actually will give us a vote on the determination at the end of the process.”

At the hearing, lawmakers sought to shed light on the project’s financing as the state and city finalize negotiations. Empire State Development Corporation CEO Hope Knight, a Hochul appointee, promised the city would not lose out on the dollars it’s currently earning in property taxes from the proposed development sites.

She argued there’s a market for high-end office space, more than 18 million square feet of which could result from the development plan. City office occupancy is currently at 42%, a pandemic high but well below where it stood before March 2020.

“Revenues from private developments provide predictable resources to fund public benefits,” she said. “The state and the city of New York are currently having productive conversations.”

After the ESD’s board gets to vote for the project, it’ll go to the Public Authorities Control Board, a body created to watchdog the state’s borrowing for big development projects.

The MTA launched its search for designs for the Penn Station project earlier this month, with responses due by July 28.

Lieber said at the hearing the right time to do the major structural work for the project during a four-to-five-year window, as the “East Side Access” project that’ll move some Long Island Rail Road Service out of Penn begin its service this year and before Metro-North makes its way into the station later this decade.

A separate project called Gateway, a $12 billion plan led by New York, New Jersey and Amtrak to create two one-track tunnels that would run under the Hudson River and connect Penn Station and New Jersey, is in early stages. Amtrak recently awarded a contract for the design of the station, the New York Times reported.

Yet a dearth of details so far on the Penn overhaul has made it hard for legislators and good-government groups to gauge how the Penn Station redevelopment would shake out.

The city’s Independent Budget Office, at the request of state and local legislators and advocacy organizations, examined the redevelopment plan and in May declared it had found too many unknowns to evaluate the plan’s economics. 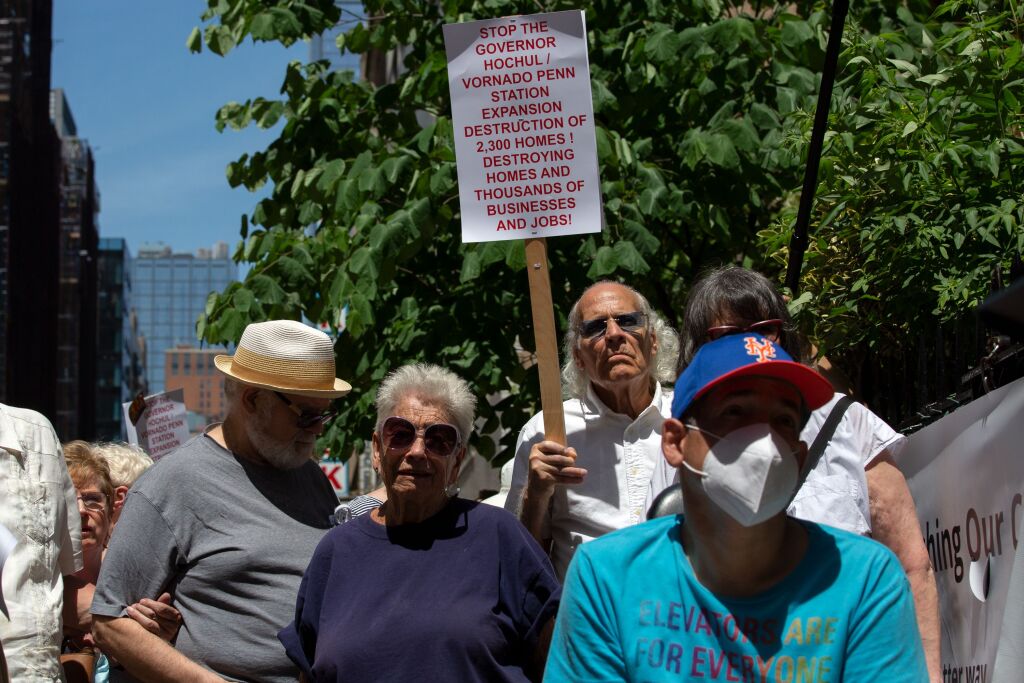 The true cost of the project remains unclear, as do revenue projections. Empire State Development seeks to receive money from the private developments using a financing scheme known as payments in lieu of taxes (PILOTs) to pay the debt funding for the station project.

A similar scheme financed the development of Hudson Yards and the extension of the No. 7 subway line. But without projected costs or revenues for the Penn project, the IBO said it was “impossible to know whether revenues will meet debt service costs.”

During the hearing, Sarah Stefanski, assistant director of housing, environment, and infrastructure for the IBO, said that a PILOT could be set up to reflect what the city’s Department of Finance would collect in taxes on a building. But she said it remains unclear whether ESD would be providing what amounts to a tax break.

“If discounts are given, they must be set at a level that creates an incentive for the development, but not so steep as to give away revenue unnecessarily, or to give developments an advantage over other similar office buildings elsewhere in the city,” she said in her testimony.

“Would you not agree with me that $4 billion in bonding over some period of time to the state of New York, while you and I will not write checks, that’s not that big in the context of what the state bond is out in capital? ” she said.

Knight said the $4 billion would be in revenue, not money borrowed from bond investors. Knight maintained no agreement has been reached with any developer yet, including Vornado Realty Trust, which owns a majority of the sites.

“We want to be a project that provides for density near mass transit,” she said. “Not only do we get the benefit of upgrading Penn Station, but we also create a central business district that will provide for 50,000 construction jobs, and thousands more other jobs.”

The fate of the Public Authorities Control Board is a wild card.

State Sen. Michael Gianaris, the “Amazon Slayer,” played a pivotal role in sinking the tech giant’s proposed HQ2 plan to establish a new headquarters in Long Island City, railing against state tax breaks for the company with a valuation of more than a trillion dollars.

But his leverage didn’t just come from being a local Queens representative: he had been nominated as the Senate majority designee for an obscure government body called the Public Authorities Control Board, a post with veto power over the project that he had made clear he might use.

But things have changed after Cuomo made tweaks to the board in the 2020 budget, which legislators approved.

Cuomo amended the law to include a provision that clarifies the purpose of the board, stating a member’s sole duty is to determine if an authority has demonstrated an adequate commitment of funds to finance the acquisition and construction of the proposed project.

It also gives the governor “full discretion to immediately remove a member of the board he or she finds to be acting, or threatening to act, beyond the scope of such member’s legal authority set forth.”

“It almost makes it as if anyone who disagrees with him might be subject to violation of the law, the public officer’s law,” Gianaris said on NY1 after Cuomo’s move. “So there would be a fear of the criminalization of policy differences in what he’s done here.”

Comrie’s bill to repeal Cuomo’s provision passed both the Assembly and the Senate. But the bill hasn’t yet been sent to Hochul, who would then have 30 days to sign or veto it — meaning the board vote could take place before she acts.

During the meeting, Krueger offered a frank assessment of what the legislators could do to meaningfully influence the Penn Station project in that case.

“As far as the actual authority of the legislature right now in this, cover your microphones, almost nothing,” she said.