With subway, bus and commuter railroad ridership still far below pre-pandemic levels, the MTA is burning through billions of dollars in emergency federal aid earlier than expected, officials warned Monday.

The MTA has long held that more than $15 billion in one-time federal COVID relief funds would allow the agency to balance its budgets through 2025. But officials now concede that early-pandemic projections of commuters returning in larger numbers were way off the mark — which could have a painful impact on riders transit workers and ballooning MTA deficits.

“When you have bigger deficits, you spend the federal aid quicker, which means you run out quicker,” said Kevin Willens, the MTA’s chief financial officer. “So we’re basically out of federal aid by 2024, which is a year earlier.”

The MTA said that fare revenue is set to be about $4 billion lower than previously projected over the course of the five-year financial operating plan, drawing what transit officials have dubbed a “fiscal cliff” ever closer for the millions of New Yorkers who ride daily on subways, buses and trains.

That raises the possibility of service and job cuts, as well as higher than anticipated fare and toll increases unless new revenue streams materialize.

“Those are some pretty ugly alternatives,” Andrew Rein, president of the Citizens Budget Commission, a nonprofit budget watchdog, told THE CITY.

Wills delivered the pessimistic financial outlook during an MTA finance committee meeting Monday, painting a grim picture of a transit agency that has gone from one fiscal crisis to another since the start of the pandemic in early 2020, when bustling subway stations became ghost towns as ridership plunged by more than 90%.

“Lurching from crisis to crisis year after year is exhausting for all of us, and we need stability in order to get riders back on board,” Lisa Daglian, executive director of the Permanent Citizens Advisory Committee to the MTA, said at the meeting.

Rein said the MTA should “make a real push” to find savings instead of cutting service or hiking fares for the riders who have remained loyal.

“They should be moving aggressively to find efficiencies in the system to reduce costs because that is the least painful way to address the structural gap,” Rein said, citing longstanding calls to cut crew sizes on subway and commuter trains. “I am under no illusion that these are easy, and a lot of this is about working with the [Transport Workers Union]but they need to make a real push on the efficiencies front.”

A report this month from State Comptroller Thomas DiNapoli said that, as of May, fares covered just 32% of the MTA’s overall operating costs — down from 51% prior to the pandemic. The agency had projected fares to cover 40%, according to the report.

MTA officials on Monday could not say when they forecast ridership will reach 100% of pre-pandemic numbers again.

“The MTA’s revenue model after COVID has to change substantially,” Rachael Fauss, a senior research analyst for the nonprofit watchdog group Reinvent Albany, told THE CITY. “That means more dedicated revenue from the state and possibly the federal government.”

In November 2020, MTA-contracted consultants from McKinsey & Company projected that “new normal” levels of ridership would reach between 80% to 92% of pre-pandemic levels by the mid-2020s.

But that forecast has now been scaled-back substantially, MTA officials said, as subway and bus ridership hovers at around 60% of the 7 million daily trips taken in 2019.

“If you turn back, November 2020 was actually before the rollout of the vaccines,” Willens said. “And a lot of the driving factors in the previous McKinsey analysis was what was going to be the length of the pandemic, when we were going to achieve herd immunity, when were the vaccines going to be effective.” 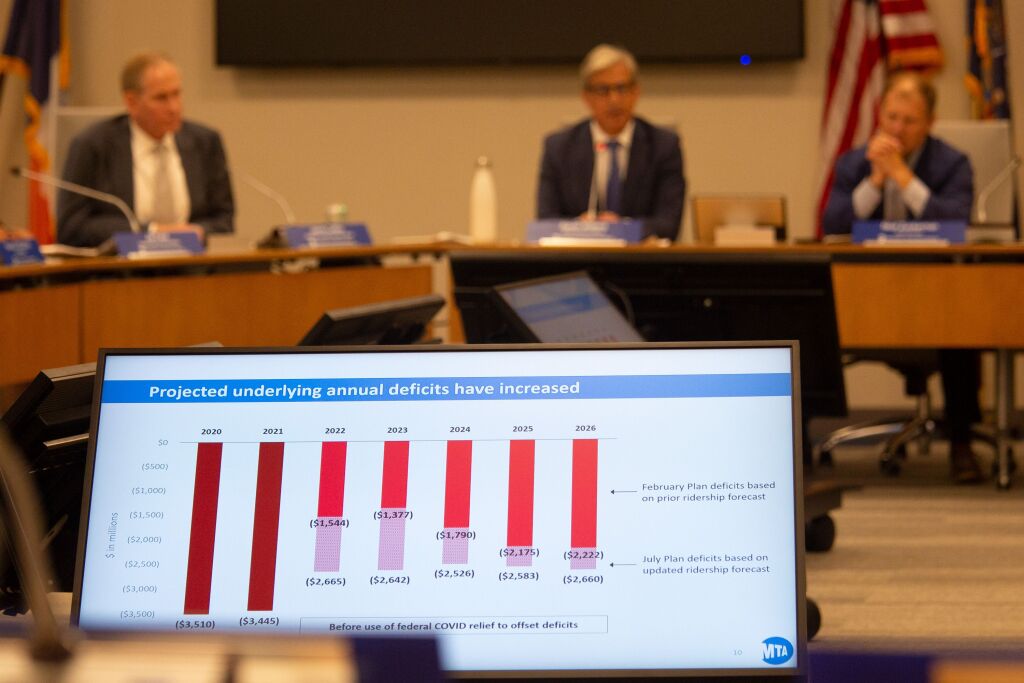 McKinsey’s earlier ridership recovery forecast that subway ridership would have recovered by now up to 77%. Instead, with many New Yorkers continuing to work from home, fewer non-work trips, declining “customer sentiment” and riders shifting to walking, cycling or driving, the estimate has fallen.

“It’s a new paradigm of the way people travel and there needs to be a new funding paradigm as well,” Daglian said. “The trinity of service cuts, fare hikes and layoffs — as the only tools that are legally available to the MTA — don’t cut it.”

At the same time, the MTA says it is also contending with increasing fuel and power expenses and higher debt service.

“They can’t take on more debt,” Fauss said. “And if they do, that’s $500 million less they can borrow for the capital plan.”

The $51 billion, five-year capital plan to upgrade and maintain the sprawling regional system from 2020 through 2024 focused on modernizing signals on stretches of six subway lines, buying new trains and buses, and accessibility upgrades for riders with disabilities. But it relies heavily on congestion pricing to toll vehicles entering south of 60th Street.

“The capital plan still desperately needs congestion pricing,” Fauss said. “That is the exact type of funding it needs, because it’s steady and reliable.”

But the congestion pricing effort remains stalled over a federal environmental assessment. MTA board member Robert Mujica, the state’s budget director, suggested revisiting projections for the capital plan based on the new reality.

“Are there assumptions that we made based on ridership and growth?” Mujica said. “We should be re-looking at those.”