The night before Michael Lopez died of an apparent drug overdose on Rikers Island earlier this month, he spoke with his mother on the phone and asked her to put money into an app.

Jennie Rosario-Megibow reminded him that she had already put money into his commissary account, she recalled 10 days after his death.

“I said, ‘Listen, I’ll think about it and we’ll talk about it tomorrow,” she told THE CITY.

Lopez, 34, was found unconscious the next morning inside a mental observation unit in the Anna M. Kross Center on July 15.

Frantic medical staff repeatedly tried to revive him and administered several doses of the opioid-overdose drug Narcan, according to a jail source familiar with the response.

He was pronounced dead at 10:13 am, becoming the 11th person in the city’s jail system to die this year. That’s on pace to surpass the 16 detainees who perished last year, the highest number in decades.

Lopez was seen on video surveillance smoking a substance and snorting pills with several other detainees the night before he died, according to the jail source.

“Why didn’t somebody do something about it?” Rosario-Megibow said through tears. “He was in the medical unit for darn’s sake.”

An initial review into Lopez’s passing by the city’s jail oversight board has similar questions.

The Board of Correction questioned whether the Correction Department’s staffing shortage has impeded staff’s ability to conduct searches for contraband drugs and weapons, according to the review obtained by THE CITY via a Freedom of Information Law request.

“How do facility and special search leaders determine what areas in the jails to search?” the review asked.

Ten days before Lopez died, Correction Commissioner Louis Molina touted the department’s increased searches since he took over at the start of the Adams’ administration in January.

“Tactical and facility search operations for contraband weapons were not done for over two years in this department,” Molina told WNYC.

Jail insiders said those more comprehensive searches were largely shelved during the pandemic because of a lack of staff. They also point out that thousands of other, more pinpointed searches for contraband were conducted during that period.

Molina said in the radio interview that officers have found over 2,700 contraband weapons and over 400 contraband narcotics during his seven-month tenure, “whether it be paraphernalia or actual narcotics.”

For years, jail officials have blamed visitors for bringing in illicit drugs. But when visitors were banned during the pandemic, even more drugs were seized, THE CITY reported in February.

That contraband data also showed an increase in drug mail seizures during that period, but those accounted for less than a third of total drug recoveries between April 2020 and May 2021.

Jail officials throughout the country have struggled for years to block the smuggling of books and magazine paper soaked in suboxone, K2 and meth.

The board’s review also questioned whether staff assigned to monitor the video feeds are “sharing their observations with facilities in real time.”

That never happened in Lopez’s case, according to the Rikers source.

“There are people in an office but they watch all areas,” the insider said. “Impossible to see everything. [The overdose] was observed after the fact upon review. emergency in real time.”

Lopez’s passing is still under investigation, but a jail captain who allegedly failed to properly tour the entire housing unit the night before the death has already been suspended, the department said.

“We are extremely saddened by yet another death in custody,” Molina said in a statement hours after the death. “No one should have to experience the loss of a loved one while incarcerated and we are doing everything in our power to keep people safe and prevent further losses.”

Lopez, who was raised in Kips Bay, Manhattan, had been in jail since May 19 facing robbery and assault charges, court records show.

He was diagnosed with schizophrenia at a young age and should never have been locked up in jail, according to his family, medical experts, and inmate advocates.

“Putting people in a jail is just going to compound whatever’s been going on with them,” said Dr. Ralph Aquila, medical director of Horizon House in Philadelphia, a nonprofit which “utilizes a holistic approach aimed at addressing an individual’s psychiatric, medical and behavioral health impediments.”

“It’s going to make them even more disturbing for the future, and it’s just an absurdity,” added Aquila, who also served as a former senior medical director of Fountain House in New York, which helps people living with serious mental illness. Approximately 40% of the city jail population suffers from some form of mental illness, according to the Correction Department. 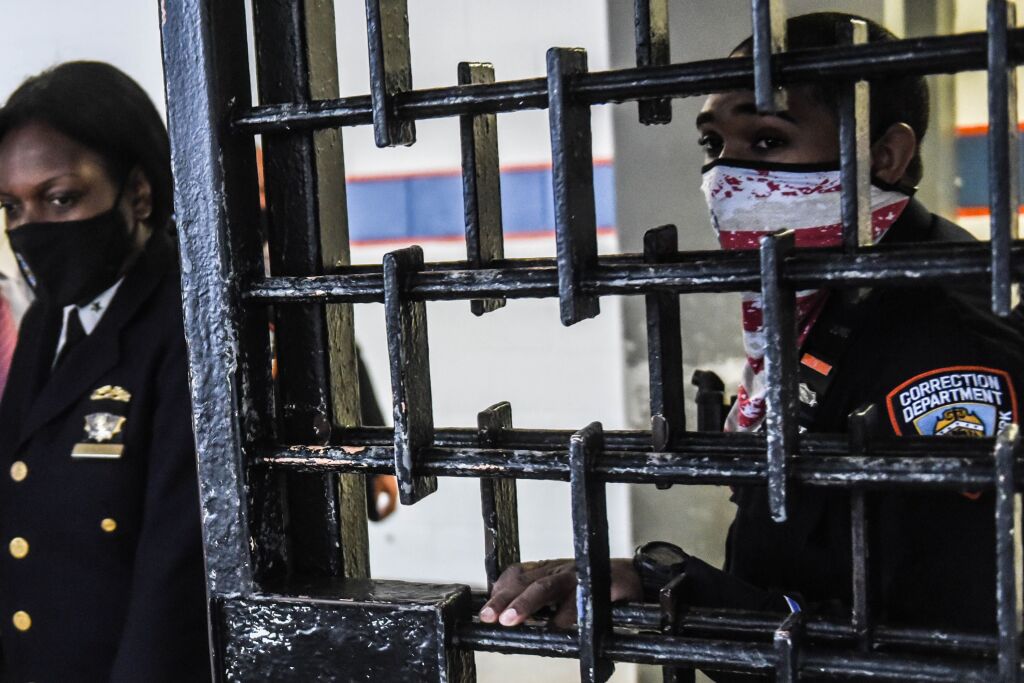 Even when mental health appointments are made behind bars, they are rarely kept. As the THE CITY reported last week, Dashawn Carter, who died of an apparent suicide on Rikers Island in May, had missed nearly 100 clinic visits.

Lopez had been arrested and locked up four times since April 2020, largely for what his defense team called “crimes of poverty.”

His complete record and details of his alleged prior crimes were expunged since his death.

At first, he stole things from his family to pay for drugs, said Rosario-Megibow, who adopted him as an infant via the Edwin Gould Services For Children & Families.

“And then he got arrested every now and then from either stealing from Duane Reade, CVS, or Target,” she said. “It was a battle.”

He’d agreed to participate in a long-term rehabilitation program but his time in it was limited because he was on Medicaid, she said.

“He was really trying,” she recalled. “But his addiction took over. His mental illness took over.”

He started hearing voices and thinking the television was talking to him, she said, noting he was never violent.

“He would ask me for money,” she said. “He’d get upset. I wish to God I could have saved him.”

Lopez struggled to take his medication especially after he discovered it reduced his libido, she recalled.

One time after a stay in Rikers he told her he was paraded naked in front of all the detainees in his housing unit “so they can laugh at me.”

“That was just devastating,” she said, noting that she nonetheless wouldn’t bail him out because she “knew his history.”

During another stint in Rikers, she saw he had a tooth knocked out and he had a black eye but ever got a clear answer what happened, she remembered. Most recently, he was homeless and afraid to go to a shelter because he was sexually assaulted at one during a previous stay, she added.

In jail, Lopez was represented by the Legal Aid Society, the city’s largest public defender group. It and other inmate advocates have called on a federal judge overseeing a longstanding class action case against the DOC to appoint a federal receiver to take over the jail system.

“Had Mr. Lopez been spared detention, he would have been connected to programming, and he would be alive today,” the LAS said in a statement. “Regular deaths have become the status quo in DOC. The inability of the Adams administration to take immediate and bold action further demonstrates that they cannot be trusted to run the jails one day longer and the appointment of a receiver remains necessary.”

‘He Never Hurt Anyone’

On Thursday, Rosario-Megibow remembered Lopez as a loving child who was “consumed” with severe mental health issues that led to multiple hospitalizations.

He was born on Thanksgiving, 1987, and was holding a bottle at a very young age, his mom recalled. As a child, he attended Public School 116 on East 33rd Street, right down the block from their apartment.

But he was later moved to a boarding school for troubled children, where he first attended the Family Foundation School, now known as Allynwood Academy, in rural Hancock, NY In 2014, the school closed after multiple students spoke out about abuses there like solitary confinement and restraints against students, the New York Times reported. 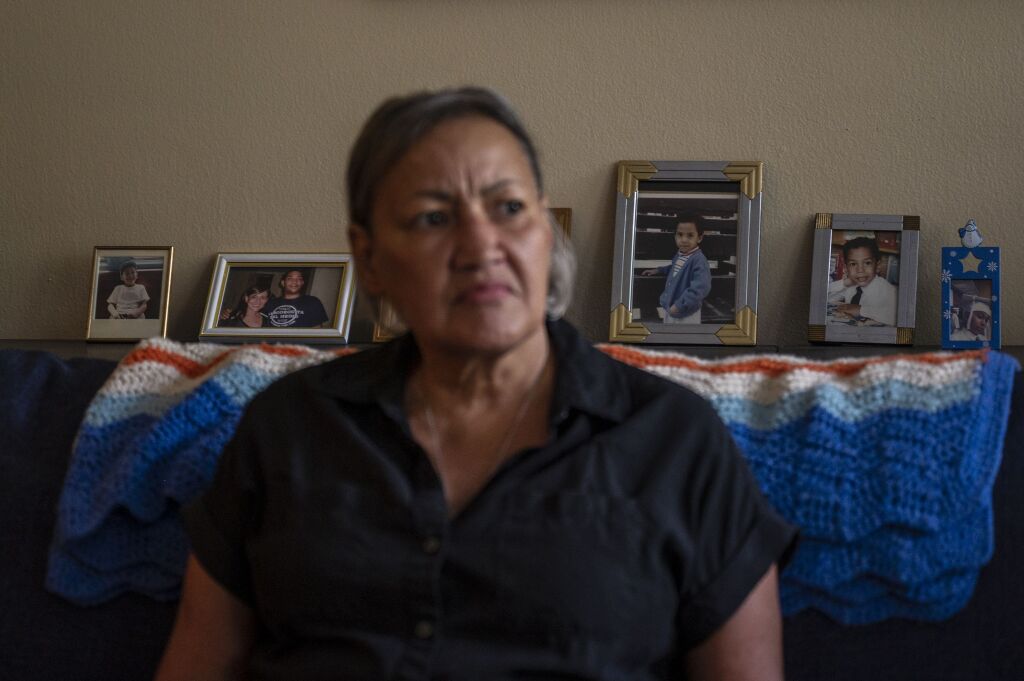 Jennie Rosario-Megibow surrounded by pictures from her son’s life.

Multiple former students have died of drug overdoses and suicide, according to the report.

“They humiliated the kids and I said I can’t put him there anymore,” his mother recalled.

So she transferred him to the Hyde School where he “excelled” until he was 17, she said, noting he was in honors history and English and the captain of his football team.

But he got kicked out when he asked a female student who turned 18 to buy liquor, according to his mother.

It also all changed when he began to experience hallucinations and other mental health symptoms.

“He never lost the love,” she said. “He was a good kid. He never hurt anybody. It’s devastating. I’m just finding it so hard to believe that he died in the hands of Rikers Island.”