In the midst of a heat wave, a door knock or phone call could make a difference.

Damaris Reyes, executive director of Good Old Lower East Side, said that during last summer’s heatwave, organizers with the housing and preservation nonprofit knocked on about 5,000 doors in the neighborhood, asking people, especially elders, if they needed help or to be taken to a cooling center.

But ubiquitous staffing issues have limited the in-person outreach her group can do this season. Workers have taken to posting calls to action on social media and sending emails reminding people to ask after their neighbors.

“I’m worried people are not going to get the help they need. A 96-degree weather prediction is no joke,” Reyes said. “There’s always people you can reach in person that you can’t reach online.”

Extreme heat is dangerous and can exacerbate underlying health conditions, and even lead to death. Senior citizens, who make up about 15% of the city’s population, are particularly vulnerable to soaring temperatures

While heat-related deaths can occur at all ages, the highest rates are among those 80 and up, according to a report from the city’s Department of Health and Mental Hygiene that studied the years 2010 to 2020. Among New Yorkers who died in their homes , 81% had no air conditioning available and the rest had none running.

“We need to treat heat waves as what they are, which are slow, silent hurricanes,” said Ruth Finkelstein, executive director of the Brookdale Center for Healthy Aging at Hunter College. “We need to activate a disaster preparedness framework, which includes activating all that mutual aid, neighbor-to-neighbor [outreach] you know, each one taps to the right, to the left, all of that.”

To avoid tragic outcomes, the city advises people to drink water, stay out of the sun and “check on neighbors” to make sure they have functional air conditioning or can get to a place that’s cool, and are drinking enough water.

Adults 65 and older are more susceptible to heat stress and are less able to adjust to quick temperature changes, according to the Centers for Disease Control and Prevention. Underlying health conditions and certain medications can also influence how bodies can regulate temperature and sweat, too.

A soccer player cools off at Stenberg Park in Brooklyn, July 22, 2022.

While the city health departments keeping in touch with vulnerable neighbors when it’s hot out advises, a simple “How are you doing?” isn’t always enough.

“You ask really explicit questions,” Finkelstein said. “If they don’t have the right answers, you need to solve problem with them.”

Here’s what experts suggest to ask:

Do you have an air conditioner?Is it running?Do you have a cool place to sleep and sit?Are you drinking a cup of water every hour?Do you have enough food, supplies and medicine?Do you have enough ice?Can I pick something up for you? Can I run an errand for you?Are you alone? Is someone staying with you?Do you have a family member you can stay with for a few days? Can I help put you in touch?

The next steps are just as crucial if the answers to those first few questions are no. Invite the neighbor to stay over if you can, or help them figure out the closest cooling center and make sure they have a safe way to get there.

Anthony Pappas, a 76-year-old Astoria resident, doesn’t have air conditioning, but made his way to the cooling center at HANAC Harmony JVL Innovative Senior Citizen Center. He said he left after about 20 minutes because no one was there.

“It was empty, and there were no books or magazines,” he said, but added he would consider returning on another day.

The center was close to Pappas’ home, but for seniors who are further from centers, it can be more difficult to make it to the spaces.

“I’m sure more seniors would come [to cooling centers] if they had transportation,” said Maria Rivera, department director for older adult services at BronxWorks. 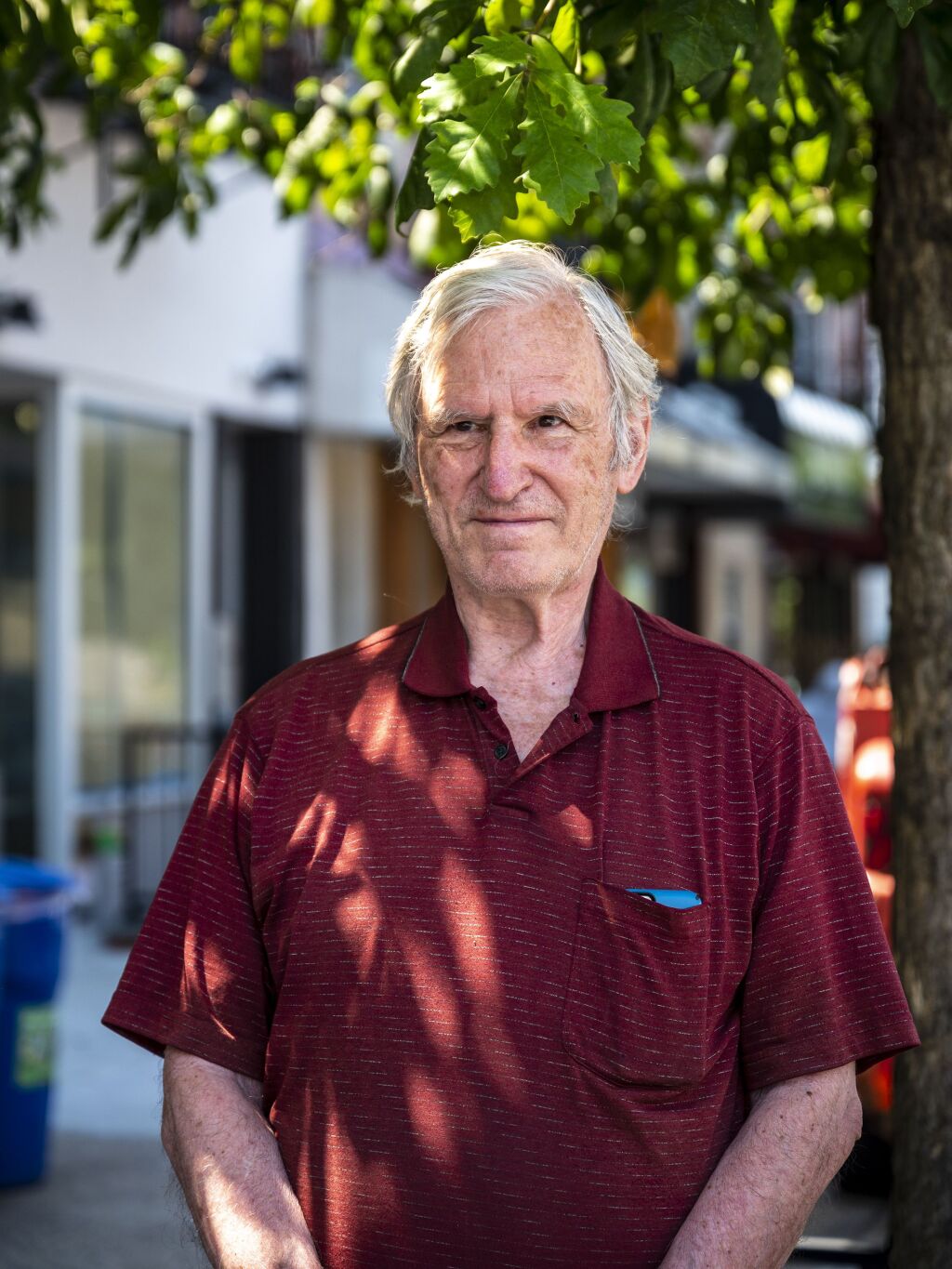 She acknowledged it can be hard to break the ice with neighbors, but it could go a long way. Since the beginning of the pandemic, the nonprofit has facilitated a “calling tree” so hundreds of people, including those who live alone, receive wellness calls. Over a thousand others get robo-calls and texts to alert them of resources, she said.

“We keep them engaged. They lost a lot of friends and even family members, so we just don’t want them to fall off,” Rivera said.

Len Valenzuela, who is in his late 60s, lives on the Upper West Side in a building with several longtime, older residents. He checks up on them to make sure they’re managing in the heat.

Valenzuela shares books on a regular basis with one of his neighbors, who is in his 90s. “I don’t see him every week,” he said, noting the neighbor has a home health aide.

Valenzuela himself hasn’t yet installed his AC unit, but has been spending time at Columbia University in the library, where he can study for the infectious disease program he’s completing.

“I can go there during the day and get out of the heat,” he said.

Recognizing the importance of tapping into specific, existing networks to combat the dangers of heat, the city has invested in expanding those groups’ capacity.

Since last summer, 16 community organizations have completed training in OEM’s Strengthening Communities program, which helps them create plans for before and during emergencies, including heat waves.

The city also launched a two-year pilot program called Be A Buddy in 2017, partnering with nonprofit organizations in Hunts Point, Brownsville and East Harlem. Volunteers would reach out — via phone calls and door knocks — to check on neighbors during heat waves and other dangerous weather events. 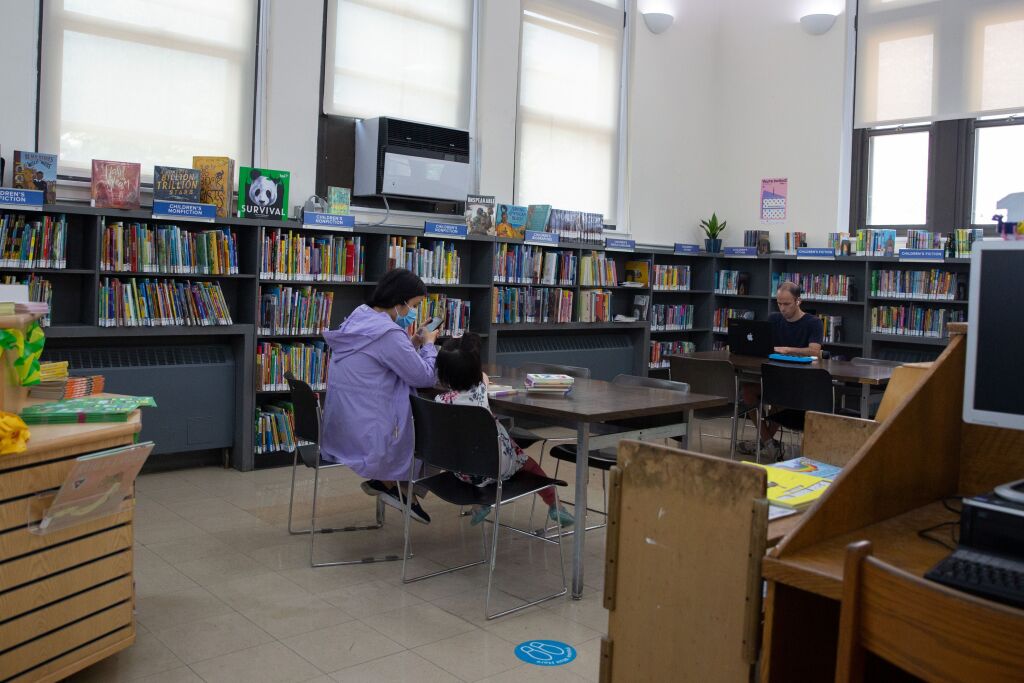 Brooklyn residents avoid the heat in a cooling center at the Walt Whitman Public Library, July 21, 2022.

The city health department had contracts through fiscal year 2022 with The Point CDC, Brooklyn Community Services and Union Settlement to continue that work, and plans to renew those for fiscal year 2023, according to a spokesperson.

As of early July, however, Brooklyn Community Services had paused its program due to staffing shortages, a staff member indicated.

None of the nonprofits in the Be A Buddy program returned requests for comment.

“The great resignation is certainly hitting the human services sector and has been,” said Michelle Jackson, executive director of the Human Services Council. “A lot of our providers have had a really difficult time staffing up and staying staffed up.”