When the pandemic slammed the city in March 2020, Frangos Peri Peri had been open inside a narrow East Village storefront for just a few months.

More than two years later, the Portuguese chicken restaurant on Avenue B has managed to survive, but its orange wooden outdoor shed on the roadway is no more.

“It was a good idea on the city’s part and it definitely helped in the first year of business, 110%,” Ishaq told THE CITY. “If we weren’t able to seat people outside, we wouldn’t have survived.”

East Village eatery Frangos is among the dozens of restaurants forced to remove outdoor dining sheds for noncompliance with city rules, June 7, 2022.

But she says a lack of official guidance caused the outdoor area to rack up violations from an assortment of city agencies. Several months ago, the shed — which Ishaq said cost more than $7,000 to build and remove — had to be taken down after being found non-compliant during 21 inspections.

For Ishaq, it was symbolic of a process that she said has not always been clear.

During a City Council hearing last month, Transportation Commissioner Ydanis Rodriguez again credited the outdoor dining program with saving thousands of restaurants and more than 100,000 jobs by turning streets and sidewalks into spots where cooped-up New Yorkers could dine and drink while getting some relatively fresh air.

But at the same hearing, Councilmember Justin Brannan (D-Brooklyn), whose district includes the popular restaurants and bars of Bay Ridge, said some of the structures resemble “abandoned shipwrecks.”

New York City has regained about 75% of the jobs lost during the pandemic, THE CITY’s recovery tracker shows, but the battering of the restaurant industry continues to weigh on its recovery. The accommodation and food services industry’s employment rate is still down 17.5% compared to pre-pandemic levels, according to seasonally-adjusted data from the Mayor’s Office of Management and Budget.

DOT records show that 12,448 Open Restaurants program applications have sought permission to set up outdoor seating since June 2020 — with nearly half in Manhattan, close to 3,000 in Brooklyn and almost 2,500 in Queens.

“This is like an industry that popped up out of nowhere all of a sudden June 22, 2020,” said Andrew Rigie, executive director of the New York City Hospitality Alliance, which represents restaurants and bars.

The rules and regulations for outdoor dining are still very much a work in progress.

As the city moves toward eventually creating a permanent program, DOT data analyzed by THE CITY shows inspections are more frequently resulting in penalties for restaurant and bar owners.

In about 10% of the inspections to date, inspectors decided to slap owners with “cease and desist” notices, which essentially meant shutting down outdoor seating. But most of those only started to pile up after mid-2021. 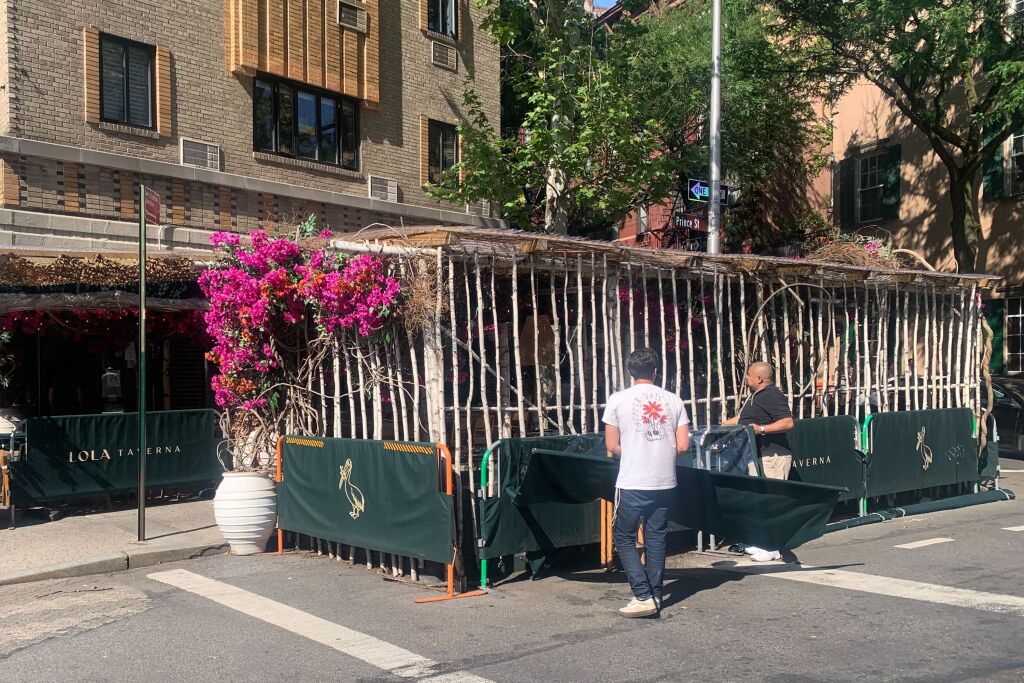 SoHo restaurant Lola Taverna had 24 instances of being in non-compliance with outdoor dining guidelines. May 6, 2022.

Interviews with residents and restaurant owners highlight persistent frustrations all around, with some calling for stricter enforcement of hours, cleanliness and parking.

“Outdoor sheds made it difficult to live here on these fronts: parking, trash, congestion,” said Trev Huxley, who lives next door to Patrizia’s, at an Italian eatery in Williamsburg.

“I still support Open Restaurants but there needs to be some kind of ground rules, some enforcement, at least in cases where there is a blatant disregard for civic life.”

Patrizia’s had to do away with a 60-by-8-foot shed on the roadway at 35 Broadway in August after being told it was in a no-standing zone. According to owner Antonio Alaio, the outdoor space helped him keep some of his workers while the restaurant began focusing more on deliveries.

“But soon people started complaining for no reason, people living in this block and the block on the other side,” Alaio told THE CITY. “I think they didn’t like noise — that is what we mostly heard from them.”

The DOT, meanwhile, says it has been going easy on owners.

A spokesperson who refused to be named said the agency has been “very lenient” on enforcement as a result of the restaurant industry still suffering from the pandemic and that it is evaluating how to juggle enforcement standards with health and safety concerns of patrons and the local community.

About 46% of the inspections resulted in an establishment labeled “compliant” or “skipped” because the seating arrangement didn’t require inspection.

Restaurant sheds on Mott Street near Bowery were still fresh and bright on Sept 2, 2020.

The agency’s inspectors reported non-compliance with dozens of DOT requirements in about 20% of inspections. In the rest of the inspections, the DOT may put the establishments on review, in a “pre-suspension” phase, or use other probationary steps short of a violation.

To date, just 60 outdoor dining structures have been removed by the city, the DOT spokesperson said, with most removed for being abandoned — with 17 removed after being damaged or destroyed by motor vehicles. Others had to go, the spokesperson said, at restaurants that have “continuously not complied with the rules of the program.”

The next phase of the Open Restaurants program — the city is hoping to establish permanent rules and guidelines for sidewalk dining by fall — comes as restaurant owners have faced complaints about unsightly structures, trash, rodents and taking up street parking spaces.

“It looks like you’re walking through the San Gennaro feast, that’s how packed it can feel,” said East Village resident Marie Hart, 45, said as she pointed at several sheds along Avenue B. “You got your bike lane and you got your walkway and your got your car lane — inside should be the restaurant lane.”

“That percentage are a low minority,” Rodriguez said at the City Council hearing in May that touched on outdoor dining. “The vast majority of the restaurants, they’re taking care of the structure.”

While DOT officials said the city has begun hiring planners, application reviewers, inspectors and outreach staff for the permanent program, implementation faces a lengthy process of legislation, design, licensing for sidewalk and roadway seating and at least six months of outreach.

The DOT has said it hopes a permanently open restaurants program can be in place by 2023, with rules that would include removing tables and chairs that are not in use, barring multi-level structures on streets and sidewalks and prohibiting amplified sound on sidewalks and in roadway dining areas. “No one has taken the position that we shouldn’t have outdoor seating,” said Susan Stetzer, district manager for Manhattan Community Board 3, which includes the Lower East Side and part of Chinatown. “The issue has been about the sheds and rats, it has been about hours and amplified music.

“It’s not a black-and-white issue.”

Rigie said many restaurants are in a holding pattern while the application and costs for the program take shape and that most “are not going to make a meaningful investment” to their current structures if they are subject to widespread changes.

“Right now, the biggest issue is the uncertainty of the future program,” Rigie said. “Restaurants are waiting to find out what the permanent guidelines are going to be to determine whether or not to comply and whether to apply.”

As he sat outside a boarded-up shed once used by a now-closed pizzeria on Avenue A, Dan Mauk, 69, said he hopes expanded outdoor dining is a fixture of the post-pandemic city.

“I get it that a lot of people live upstairs and have to listen to the noise,” he said. “But that’s New York — they bring a lot of life to the streets.”

One block away, at Frangos, Ishaq said she wants a “viable solution.”