A group of Queens street pedestrians have organized one of the city’s first local vendor associations, centered around a bustling but chaotic plaza — as some nearby businesses say the influx of mobile merchants is causing them heartburn.

The work to form the new Street Vendor Association at Corona Plaza had begun before COVID hit but became more vital as throngs flocked to the public square just off the elevated No. 7 subway line to find work, organizers say.

“After the pandemic, a lot of people were left without jobs,” said Veronica Fructoso, 39, who began selling perfume and toys at Corona Plaza three years ago, after working for years as a waitress at a restaurant in Queens.

She was elected this year as a representative in the association made up of the vendors, who mostly sell food from central and South America, including tacos, pupusas and agua frescas, as well as some household items, clothing, and electronics.

A storm roll in behind the vendors at Corona Plaza on Thursday, July 21, 2022.

Most of the vendors are undocumented and operating without permits, SVA officials said. The city’s health department caps the number of food permits, which are difficult to obtain.

The City Council passed legislation in early 2021 that was supposed to dramatically expand the number of food vendor licenses, but the Department of Health and Mental Hygiene is lagging behind schedule in actually offering them, THE CITY reported earlier this month.

To sell at Corona Plaza, vendors are now encouraged to sign a community agreement, adopted in February, that lays out a code of conduct and other rules. When issues come up, Fructoso said they try to work things out internally — creating a model for other street vendors, she said.

“I love this work because what we’re doing here, and what we’re advocating for, benefits all of the vendors,” she said.

But owners and managers of shops around the plaza contend unlicensed vendors cause more trash to pile up and rats to run rampant.

“The problem is getting bigger and bigger,” said Marlene Velasco, 60, who runs La Mexicana deli on National Street, right off the plaza. She pointed to double standards in enforcement. Marlene Velasco said there’s little rule enforcement for the vendors who set up around her deli, but more more trash and rats. July 28, 2022.

“I have $7,000 a month in rent,” she said “I have to pay for a little tent outside [the shop]. If I don’t pay Department of Transportation, they’re gonna write me up. But with the vendors, they do nothing.”

The DOT said it is currently working on the needs of the plaza, which the agency created out of a former service road in 2012 and became an official pedestrian plaza in 2018 after an approximately $7 million renovation.

“We want to make sure that Corona Plaza is a place that is used for those who make a living in that area but also for the business community that have their businesses around the area,” DOT Commissioner Ydanis Rodriguez told THE CITY.

“We will see the plaza providing the services that were intended when we created it, which was to have a destination for residents of Queens to be able to enjoy.”

The number of vendors around the plaza more than doubled in the first months of COVID-19, according to officials with the Street Vendor Project, a citywide nonprofit that has been helping the SVA of Corona organize.

While the number fluctuates, around 89 steady vendors sell inside the 13,000-square-foot plaza and along adjacent streets, they said.

The surge of vendors, many of whom were people who had never sold in the city before, created some initial problems, said Carina Kaufman-Guitierrez, the Street Vendor Project’s deputy director.

“There was a lot of need for information, so people not only know their rights but also know their responsibilities,” she said

Luis Antonio Asitimbay Rocano, who used to work as a busboy in a restaurant, now sells soccer jerseys, hats, flags and electronics from a table set up in the plaza. 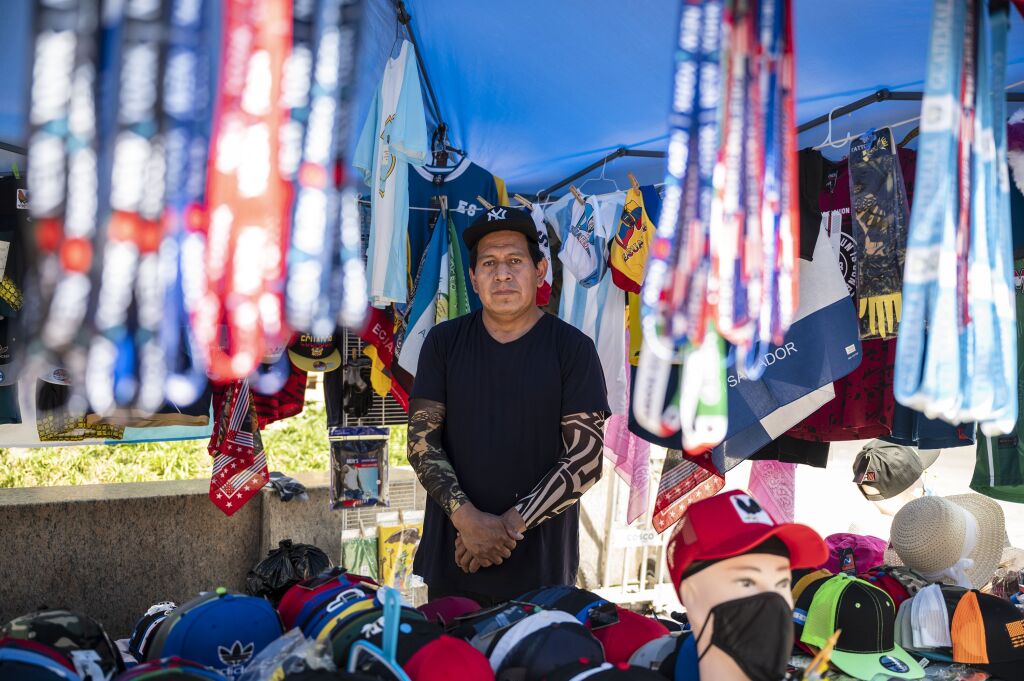 “I couldn’t make ends meet, rent is too high,” he told THE CITY of why he started to sell in the public square. Vending work is more stable and communal, and he’s outside most days except during inclement weather, he said.

“Everybody tries to help each other,” he said.

The organizing at Corona Plaza was also boosted at the end of 2020 by a $600,000 grant given to the Queens Economic Development Corporation by the Department of Small Business Services to revitalize Roosevelt Avenue from Junction Boulevard to 114th Street.

The grant itself came out of an SBS survey of the neighborhood’s needs conducted in 2017. The Queens borough president’s office then created a task force to address some of these issues, focusing on cleanliness maintenance, officials said.

QEDC hired Sam Massol, who’d previously worked with community-based organizations in Queens, to consult with the street vendors as well as owners of the shops inside and around the plaza. They’ve coordinated cultural programming with other Queens organizations and looked to connect that to the vendors, he said.

“We wanted to use the strength of the community’s culture,” he said.

Corona and the surrounding neighborhoods were some of the hardest-hit during the pandemic. Yet, as other public spaces around New York City, particularly in Manhattan, became desolate, “the economic activity at Corona Plaza thrived,” Massol told THE CITY. But that also created a more complicated place to maintain.

“The reality of the plaza is that there are some serious quality-of-life issues,” he said.

Many of the new vendors had also never sold food in the city before. Last summer, a propane tank stored next to a stand under the 7 train exploded, injuring at least one person whose arm caught fire, Massol told THE CITY. Other vendors often cook over open flames.

dr Tazhman Hourizadeh owns Corona Vision right on the plaza and argued the vendors selling clothing, fruit and vegetables outside his business don’t often clean up after themselves.

“They block in front of my office, I have no view, people can’t see my office anymore, and they get the area to be very, very dirty,” he told THE CITY. He said he’s complained to the Street Vendor Project as well as the police.

Alex Ramirez, a baker at Tulcingo Bakery on the corner of the plaza, said he comes in every morning to trash and “too many rats.” He said the business had also been hit with a $135 ticket for trash outside that he blamed on vendors.

But Maiuxsi Yepez, who works at the nearby Boost Mobile, didn’t blame the sellers for trash.

“I don’t think it’s the sellers who make the mess,” she said. “I think [the Plaza] should be better organized [with] someone who is in charge of taking the garbage and placing new bags in the containers so the area doesn’t look dirty.”

‘The True Strength of Queens’

The Corona vendor association says its goal is to resolve these problems cooperatively. The community agreement members have to sign lays out rules for keeping their space clean, keeping exits and entrances clear, and clearing out tents and tables when they leave. Vendors who were there before the spring of 2020, helped newer sellers find spaces to set up, creating a map of where people go.

Vendors also carry out frequent plaza cleanups, and the association and QEDC are working on a system where all of the vendors can chip in for commercial trash collection, which all private businesses in the city are required to use.

The Department of Transportation has been paying for maintenance and garbage pickup through a subcontractor as a courtesy, according to a spokesperson. 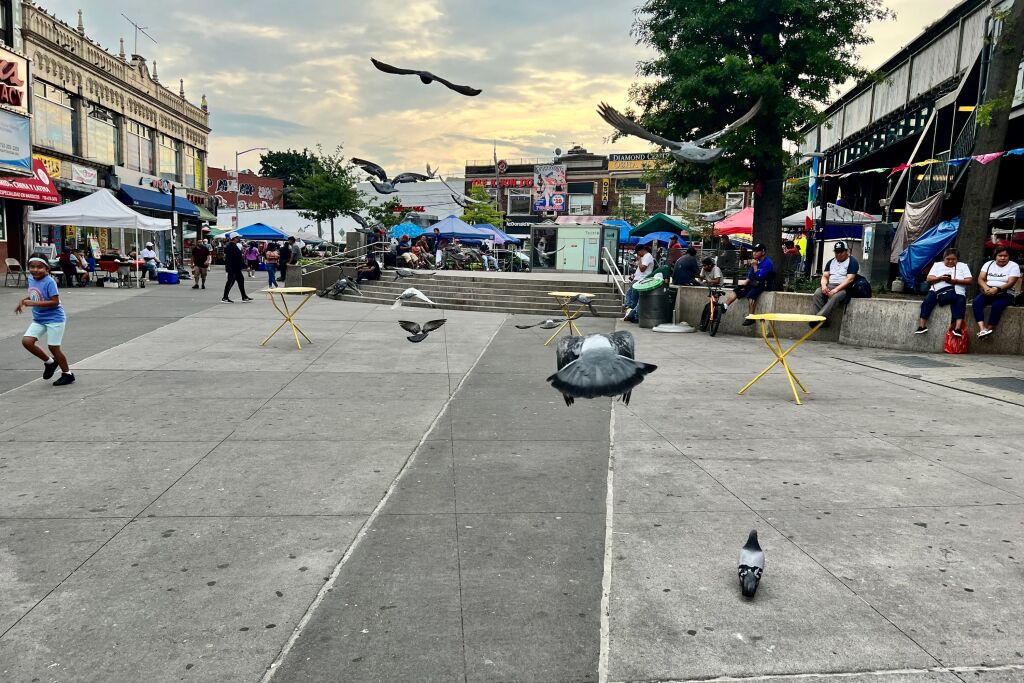 “Vibrant populated streets are safe streets,” State Sen. Jessica Ramos (D-Queens), who represents the area, told THE CITY, adding that she is “grateful to this organized association of vendors both for sharing their entrepreneurship with us and being the eyes and ears of Corona Plaza.”

“I am so proud to see they are already working hard to protect their rights and improve their relationship with brick-and-mortar stores, law enforcement, and the rest of the community.”

Assemblywoman Catalina Cruz (D-Queens) said the group “was born out of street vendors’ love for their work and their community.”

When there are issues, the association aims to resolve them on their own, members said.

Rosa Calle, 49, has sold food on the corner of 104th Street and Roosevelt Avenue, at the edge of the plaza, for more than a decade.

“COVID really changed things and put people in a desperate situation,” she said.

Calle said the formalizing of the association has been helpful to both newer and more established vendors.

“There’s a system in place and they need to find a spot that can actually work for them, a spot that isn’t already taken,” she said. “This helps avoid conflict and it avoids a possible altercation.”

Massol said he imagines Corona Plaza could be like the “Latin Arthur Avenue,” referring to the Italian food hub in The Bronx. And the ultimate goal is to “create a safe place where you can bring your family to enjoy and celebrate the true strength of Queens.”

“The one thing that will unite the vendors and the brick-and-mortars is more money coming to the neighborhood,” he said.