Ursula Kaczmarek estimates that about 90% of her diet comes from the trash.

Kaczmarek, 44, is one of several dumpster divers, or freegans, who has developed an intimate sense of the edible food that local bodegas and grocery stores throw out in her Brooklyn neighborhood.

A data scientist by day, she hunts by night through trash bins and shines a flashlight into garbage bags she makes sure to carefully tie back up.

Sometimes she finds, as she did last Thursday with THE CITY, prepackaged salads in plastic clamshells, loose grapes and strawberries, flower bouquets, ripe avocados, cartons of yogurt, fresh bagels, whole heads of cauliflower and unopened bottles of hot sauce.

She either brings the rewards of her foraging home or to community refrigerators.

“When I first did it out of curiosity, there was a very emotional response to seeing perfectly good food in the garbage. I don’t think anyone’s OK with waste, so when you see it, it’s very upsetting,” Kaczmarek said. “I’m not able to stop this machinery of waste, but I can do this.”

She thinks of the activity as an intervention to prevent edible food from ending up in a landfill or being incinerated — both of which are bad for the environment — and wishes more places in the city donated their food or composted.

The city is about to bring back fines to push businesses to do more to reduce food waste.

Under a Bloomberg-era law, several food-related businesses — among them, supermarkets, restaurants, caterers, hotels and cafeterias above a certain square footage — have long been required to separate their organic waste and ensure it’s composted or otherwise digested for beneficial use .

But it’s unclear how often that’s actually happening. Kaczmarek and other dumpster divers have a firsthand understanding at how separating organic material is rarely practiced by restaurants and grocery stores (though many spots along their dumpster diving route aren’t big enough for the commercial compost rule to apply to them).

Data obtained by THE CITY shows that the Department of Sanitation has not issued any violations for businesses out of compliance with organics requirements since before the pandemic.

The trash collection agency says it will begin on July 31 to issue penalties again — a $250 to $1,000 fine — for establishments that serve or prepare food but don’t lawfully separate their organic waste.

It remains to be seen whether DSNY will actually enforce that law — and questions abound as to whether the places it applies to are getting ready or even aware of the change. Some business owners THE CITY spoke to were in the dark on the issue.

But for stores, hotels and other businesses that already have systems in place, they and trash-efficiency experts contend that the organics law presents an opportunity to meaningfully tackle food waste and revamp sustainability practices.

He noted that inspectors will once again visit businesses and the department is conducting “extensive outreach” before that happens.

As New York waits for a city-wide residential composting program, zero-waste experts and advocates see the commercial organics law as a source of hope.

The DSNY estimates about 35% of the city’s commercial organic waste — which includes food scraps, soiled paper and plants — could be diverted if businesses follow the rules. That means companies must hire a service to separately take away organics to be composted into soil, or “digested” to create biogas and fertilizer.

When organic material is left in regular trash and sent to landfills, it releases methane, a potent planet-warming gas, into the air. 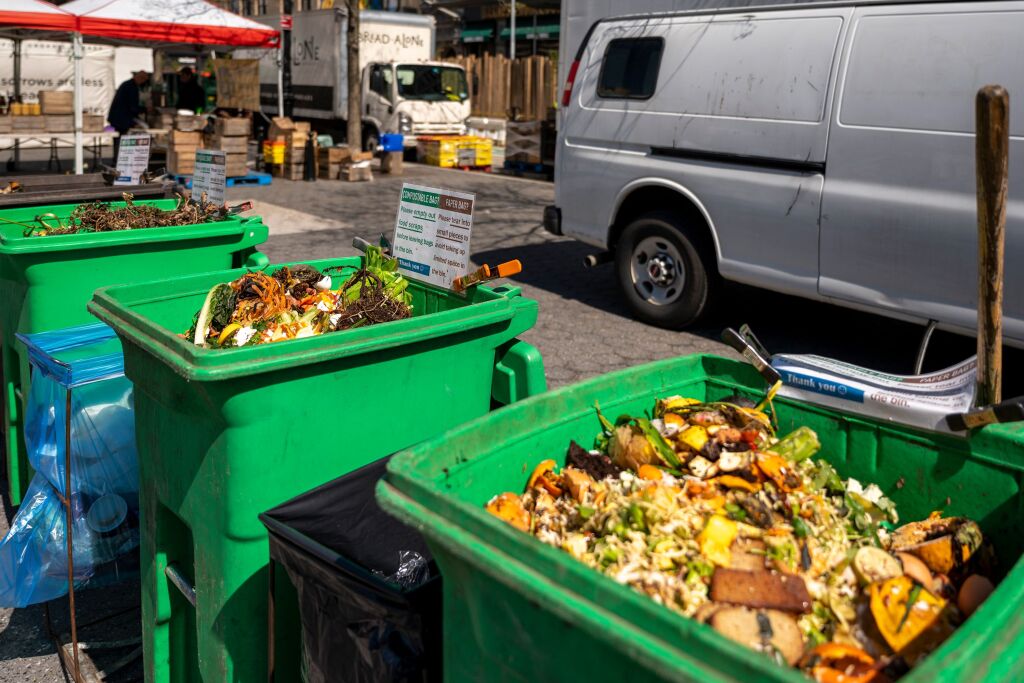 In 2013, the City Council estimated the law would affect 5% of the city’s restaurants and capture 30% of waste generated by all eateries citywide.

Businesses have been subject to the law in phases: In July 2016, particular hotels, stadiums, arenas and large food wholesalers and manufacturers were brought in. Two years later, some grocery stores and more restaurants had to comply. In July 2020, the list expanded to certain smaller restaurants, delis, cafes and cafeterias.

Citing the coronavirus pandemic, the city has not issued any fines to businesses out of compliance with the requirements for two years.

Ushma Pandya Mehta, a co-founder and partner of waste-management consulting firm Think Zero, is working with local companies to figure out how to implement organics separation and recycling — and is informing many of her clients about their obligations under the law.

“While DSNY was not fining, no one was urgently doing anything about it,” Mehta said, adding that often when the companies do hear about the requirements, they’re interested in complying from a corporate responsibility point of view.

“There’s a lot of operational logistics, but I think the first hurdle is awareness of the rules and getting facility managers comfortable with what it means to separate organics,” Mehta said. “I can tell a manager what needs to happen, but it has to trickle down to the bus boys and line cooks and sous chefs.”

Corinne Hanson, corporate director of sustainability and impact at SH Hotels & Resorts, which runs the hotel, didn’t know about the specifics around the violation, but she said before she started her job about a year ago, the hotel was having “a tone of issues” with its on-site digestor, which processed organic waste.

The hotel has since hired a company to transport its food scraps instead of processing them on site, Hanson said. She added that between its recycling and organics programs, the hotel diverted 88% of its waste in June and is on track to divert 90% this month.

Already, the hotel sends its spent oyster shells to the Billion Oyster Project and uses certain food scraps, such as used coffee grounds, to make shrubs and syrups for cocktails. Hanson said the hotel is also looking into working with Peat, a New York City-based start-up that picks up food waste from restaurants and hotels and uses it to grow mushrooms.

The DSNY said it has conducted an extended warning period to give business owners a heads-up about what they need to do — a welcome action as they struggle with other matters.

“We’re glad the Department of Sanitation is focusing on education and compliance first and issuing violations and fines to restaurants only as a last resort, which we will continue to encourage them to do,” said Andrew Rigie, executive director of the NYC Hospitality Alliance, a restaurant umbrella group.

Christina Mitchell Grace, CEO and founder of zero-waste consulting company the Foodprint Group, said she has a hunch that many companies still don’t know they’re required to separate their organics.

“There’s really a lack of awareness because people are heads down, particularly in hospitality, and they’ve been hit so hard with COVID that they need the city to be screaming from the rooftops that this is the law and that this is important and that organics cannot be put in the trash,” said Grace, whose firm works with 1 Hotel Brooklyn Bridge. 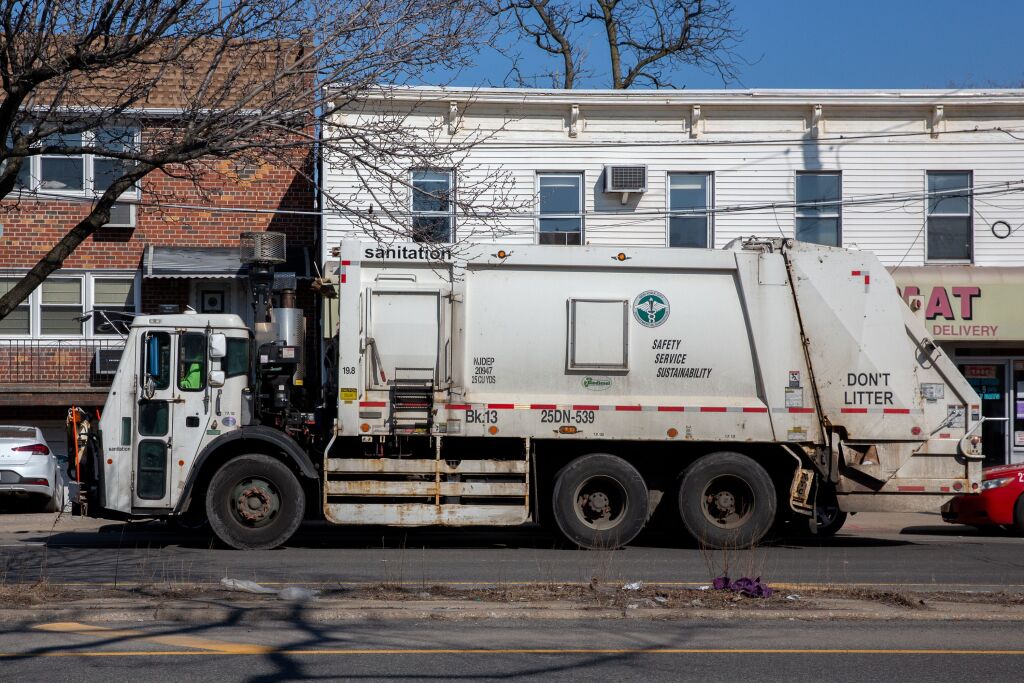 A sanitation truck heads out from a depot in south Brooklyn, March 3, 2021.

A manager at the Key Food grocery in Clinton Hill, Brooklyn — a stop on Kaczmarek’s route — said he hadn’t heard of the organics separation requirements until THE CITY asked. The store lacks a separate bin for food waste.

“Recycling and trash are separate… the food, we put it together with the trash,” said front manager Luis Polanco, referring to produce that’s not sold. He recently started giving extra food from the market’s hot bar to some volunteers who bring it to the Fort Greene Community Fridge.

An important aspect of managing organic waste is source reduction, which DSNY has encouraged businesses to do through reducing excess orders, avoiding overproduction and training staff to increase efficiency.

That’s what Kaczmarek would like to see more of.

“A lot of this stuff should not have been produced in the first place,” she said.

“I do think that citizens can play a role in this too,” said Anna Sacks, a regular trash trawler and chair of the Manhattan Solid Waste Advisory Board, suggesting that New Yorkers be paid for spotting organics recycling violations. “I think crowdsourcing is the way to go to enforce this.”