Responding to the US Supreme Court’s landmark rejection of New York’s restrictive gun carry permit laws, New York’s political leadership has begun crafting a new law designed to limit where guns can be carried in public as a workaround to the high court’s decision.

But will their proposals withstand expected litigation from gun rights groups?

Last week, the court by a 6-3 vote declared New York’s requirement that gun owners must show “proper cause” to obtain a carry permit violates both the 2nd Amendment’s right to “keep and bear arms” and the 14th Amendment due process clause.

On Wednesday, Gov. Kathy Hochul spelled out some details of the legislation Albany hopes to pass during a special session Thursday aimed at keeping as many restrictions to public carry in place without running afoul of the court’s ruling.

The final legislation will include tightened requirements for obtaining a permit and declaring specified “sensitive locations” to be gun-free zones.

But if Albany defines what’s a sensitive location too broadly, the state of New York could find itself back in court.

On Wednesday, the Supreme Court’s ruling on New York State Rifle & Pistol Association v. Bruen came up during a press conference by Mayor Eric Adams and Attorney General Letitia James announcing two lawsuits filed by the city and state to shut down the sale of so-called ghost guns, which are built from parts ordered online that have no serial numbers and are essentially untraceable.

The number of ghost guns seized by the NYPD has jumped by 181% so far this year from the same period last year, NYPD officials say. The lawsuits by the city law department and the attorney general target a total of 15 online retailers selling these guns.

What Is Sensitive Location?

Both Adams and James addressed the question of sensitive locations, admitting that new gun regulations must be carefully designed to withstand legal challenges. For example, City Council speaker Adrienne Adams last week called on Albany to draft legislation that would effectively declare most of the five boroughs “gun free.” At his press conference Wednesday, Adams admitted this was wishful thinking.

“My definition of sensitive location is a sensitive city — the entire city of New York,” he said. “The Supreme Court said we can’t do that, and so I think that a clear definition of what it looks like is going to fall with my Law Department.”

In the majority decision, Justice Thomas acknowledged the legality of “sensitive places,” but made clear there were limits, singling out Manhattan as an example.

“There is no historical basis for New York to effectively declare the island of Manhattan a “sensitive place” simply because it is crowded and protected generally by the New York City Police Department,” he wrote.

Hochul, fresh off her decisive primary victory Tuesday, said during a press conference that the state intends to limit the number of people walking the streets with concealed firearms, but only in a way that will withstand legal attacks.

“Literally the decision said, ‘you cannot say the entire island of Manhattan is off limits.’ We understand that,” she said. “That’s why I’m working hard with my team to have something that is common sense, that is legally sustainable…. But I want to make sure that we’ve done everything we can to protect the citizens of this state, so I will go right up to the line. I will not cross the line, but I know that we can do whatever we can to protect New Yorkers.”

Jerold Levine, a New York City attorney specializing in gun licenses and a Second Amendment rights advocate, worries that the state’s proposed legislation will, in fact, cross the line.

“What’s the rule? How broad is it? How much time is it? How big is it?” he said. “The smaller and more compact the rule is about restriction, the more likely it’s going to be upheld by the court. But I suspect that New York is going to go in a direction in which they’re going to really push the edge of the envelope.”

Hochul said the legislation worked out with Assembly Speaker Carl Heastie and Senate Majority Leader Andrea Stewart-Cousins ​​is expected to bar carrying handguns on public transportation, in places of worship, and at polling places, schools, government buildings, health and medical facilities, and “Places where children gather” such as day care centers, parks, zoos, and playgrounds.

James, who joined Adams at the ghost gun press conference, added his own suggestions, including “concerts, places where people assemble, and landlords.” She said property owners could “post notices up with regards to individuals not having firearms in and around common spaces.”

For her part, Hochul has a much broader definition of sensitive locations in mind, encompassing most private-sector locations. The governor floated the idea that private businesses would be declared presumptively gun free, although they could “opt in” if they choose to be an establishment that allows people to carry a concealed gun.

“The presumption is that private property owners will not want to have concealed carry weapons on their premises. But should they decide they do, they would actually affirmatively put a sign in their window — a bar, a restaurant, gathering place — ‘concealed carry weapons, welcome here,’” Hochul said. “We’re going to take that very strong step, but we believe that is sustainable.”

New Yorkers Against Gun Violence, a pro-gun regulation group that’s been working with Hochul and the Albany leaders on the language of the legislation, supports the presumption clause for private businesses. 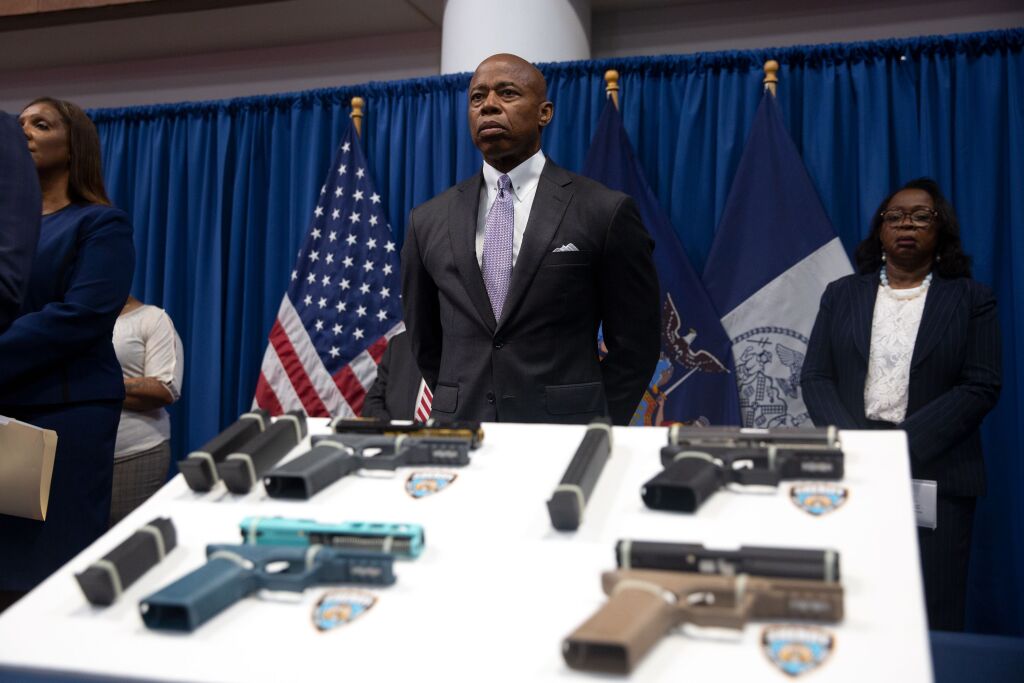 “When you’re walking around New York City in specific sensitive places or outside New York City, there’s an expectation that you’re not going to confront someone who’s carrying a hidden gun,” said the group’s executive director, Rebecca Fischer.

Notably, Levine, the gun rights lawyer, told THE CITY that he expects that the presumption clause will withstand litigation, saying that private businesses can bar people with guns the same way they put signs up in their stores saying “No shirt, no shoes, no service.”

But he predicted a high likelihood of further legal action over the final list of sensitive locations as defined by the legislation.

“They’re going to make it a criminal offense for people to carry in various areas, and that’ll be one of the next challenges that gets sued and takes seven years to get to the Supreme Court,” he said.

The other issue that could wind up back in court is the question of how restrictive the permit process is going forward now that the Supreme Court has declared the current protocols unconstitutional.

Under the proposal being discussed, the licensing requirements for a concealed carry permit will be expanded to require at least 15 hours of in-person training, as well as live fire training at gun ranges, according to a source familiar with the discussions. Applicants would also have to undergo extensive background checks — similar to the system already in place in New York City — as well as background checks to purchase ammunition, Hochul said.

“What we would do is create a baseline of qualifying factors and factors to be considered — you know, criminal behaviors and pass certain cases that have not been covered before: misdemeanors, certain misdemeanors. We’re looking at a broad category,” she said.

“But what I will not do is limit the ability of a locality that wants to take a more restrictive approach, or have more criteria to consider than we have as a baseline,” Hochul added, leaving open the ability for New York City and other municipalities to build on the state’s rules to add additional conditions.

No matter what Albany comes up with during Thursday’s special session, many billable hours by many lawyers are sure to follow.